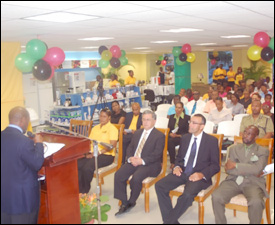 St. Kitts and Nevis’ Prime Minister Hon. Dr. Denzil L. Douglas says the refurbishing of Courts Basseterre is an important indicator of the company’s confidence in the economy of the twin-island Federation.

Speaking at a ceremony to mark the refurbishment, Prime Minister Douglas said it is another positive development taking place in the Federation’s private sector.

“Despite the economic challenges faced, as a result of the global economic environment, developments, like this one, breathe the air of positivity in the business community. This is always a good thing, as we work assiduously in the Public and Private Sectors to do our part in securing and growing the economy in these testing times,” said Prime Minister Douglas.

He cited Court not only as a very good corporate citizen that has responded to several community needs and has made significant contributions to Government Ministry programmes in areas such as sports, education and sustainable development, but “the company is an important contributor to the St. Kitts and Nevis economy having successfully built a strong customer base on both islands.”

“As a key facilitator of Private Sector activity, Government is always interested in ensuring that the environment for business development is favorable. Of course, this is not always an easy task, because we all know that external influences factor into the equation. Nevertheless, a close working relationship between the Private Sector and the Public Sector is critical in achieving economic stability and creating the platform for future growth and development,” said Prime Minister Douglas.

Dr. Douglas expressed his delight and extended greetings, congratulations and best wishes of the Government to Courts (St. Kitts and Nevis) Limited on the official launch of the newly refurbished Basseterre branch.

“From what I have been hearing, it seems that it is quite pleasing with many customers, and in that sense, the new look signifies vibrancy and interest in making the shopping experience more pleasant and convenient for customers,” said Prime Minister Douglas.

The theme of the refurbishment is “Who knew New could look so good!”

All floors of Courts Basseterre have been refurbished.

Pastor Nathan Esdaille of the Rehoboth Church gave the blessing before Deputy Prime Minister and Minister of Labour Hon. Sam Condor cut the ribbon with the assistance of Prime Minister Douglas and the Courts officials.

Senior Credit Officer, Mrs. Lucinda Jacobs gave the Vote of Thanks, which was followed by a tour of the newly refurbished floors by Courts OCES Operations Director, Mr. George Harford.