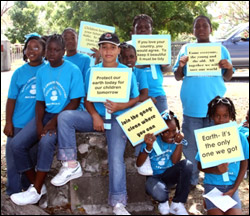 Earth Day in Nevis was officially observed on Tuesday April 22, 2008, with a march dubbed “Litter Stomp”. The activity showcased encouraging signs and slogans that the Nevisian society embarked on in a collaborative effort with the Solid Waste Management Authority to keep Nevis clean and beautiful.

With musical accompaniment by Nevis’ local “Iron Band”, the litter stomp which culminated at the Gazebo in the vicinity of Old Hospital Road in Charlestown saw participants made a prior visible entrance into Charlestown holding placards which depicted Solid Waste Management Authority awareness messages against littering.

On hand was Minister of Health in the Nevis Island Administration (NIA) Hon. Hensley Daniel, who spoke to participants. He said the observance of Earth Day was more than just a walk and the actions of the community should be a daily occurrence.

He spoke of the destructive habits of society that were harmful to the sustainability of the environment. He also spoke of precautionary measures that must be applied by the people of Nevis to address their consumption patterns.

“We are consuming what we don’t produce and as a result we are over consuming in Nevis. Mrs. Lawrence will tell you about the tonnage of garbage generated in Nevis is significant in a 12,000 population. We need to curb our conspicuous consumption and reduce, reuse and recycle,” he said.

Mr. Daniel underscored the aesthetic importance of Nevis to the vibrant tourism sector. He said visitors were attracted to Nevis because of its appeal and if the aesthetic beauty of the island was devalued, the heightened attraction to the island as a tourist destination would be lessened.

“I want to say to you that Nevis must remain unspoiled and part of that programme for keeping it unspoiled must increase greater sensitivity to the environmental work programme to clean up the villages.

“If you drive through Nevis, you would see men cleaning the streets and unblocking the drains and the road construction that we [NIA] have undertaken, we are insisting on the creation of systematic drainage patterns so that we avoid flooding and reducing run off from heavy rains,” Mr. Daniel said.

The Minister of Health declared that 98 percent of food consumed on Nevis would contribute to an environmental and health disaster. He implored the community to exercise precautionary measurers with regard to the nutritive value of foods they consumed and to pay less attention to food items that are attractively packaged by distributors.

He surmised that the garbage load for Nevis could be reduced if persons donated clothing to charitable organizations for resale, reconditioned electronic items and consumed less packaged food items. Mr. Daniel implored the people of Nevis to return to backyard gardening and to grow healthy fruits and vegetables.

He saluted the efforts of the Nevis Historical and Conservation Society (NHCS) and the Solid Waste Management Authority for their collaborated efforts to keep Nevis’ environment clean.

She also offered some tips to the community on what could be done to help keep Nevis clean.

“We can purchase quality products that would last longer, throw out less. We can purchase products with less packaging, return egg cartoons to the local egg farms. Don’t throw out all unwanted items, donate to charity. Don’t idle engines for long periods and reuse shopping bags,” she said.

The march attracted participants from the youth organisation Helping Our People Excel (HOPE Nevis), students from the Maude Cross Preparatory School, representatives from the 25th Independence Anniversary Committee, the Federation’s Peace Corps Volunteers, NHCS,  and other members of the community.