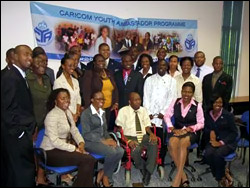 Ian Richards and Jihan Williams are currently in Barbados, working on new strategies to boost the effectiveness of the CARICOM Youth Ambassador Programme (CYAP) for the period 2008 to 2011.

The regional youth advocates, who are mandated to promote CARICOM issues on the national level, are meeting for an April 21 to 23 workshop at the United Nations House in Christ Church, Barbados. An opening ceremony was held on Monday to welcome the new and returning Ambassadors who were presented their instruments of appointment by the Permanent Secretary of Youth (Barbados) Lionel Weekes.

Deputy Programme Manager for Youth Development at the CARICOM Secretariat, Dr. Heather Johnson applauded the 26 members at the meeting, among whom 15 are new, for their commendable volunteerism and dedication to the CYA programme (CYAP). She told the CYAs that they are important tools in the effort to educate young people on the national level and encouraged them to network with their peers and related associations such as national youth councils to ensure a wide range of youth are positively impacted by the programme.  Dr. Johnson thanked the Government of Barbados for hosting the three-day workshop, which is the first for the year.

Jihan Williams, who was appointed CYA earlier this year, said that the meeting has been proceeding extremely well, adding, that her expectations before the meeting have been surpassed. She noted that the meeting has allowed an opportunity to learn about best practices in project implementation and will enhance the local programme in St. Kitts and Nevis. Ian Richards agreed with his counterpart and explained that there are two projects to be implemented in the Federation in the second and third quarter of the year. Additional details will be released at a later date.

Dr. the Honourable Esther Byer-Suckoo, Minister of Family, Youth, Sports and the Environment revealed that her Government, which was elected to office three months ago, is proud of the work done by the CYAs on the regional level. The Minister stressed that the future of CARICOM is in good hands as the Youth Ambassadors continue to advocate for youth empowerment and regional integration. Minister Byer-Suckoo encouraged adults and other youth oriented organizations to embrace the vision of young people in order to enhance the capabilities and avenues for success.

CYAs have a heavy agenda during the final two days as topics to be discussed include the Caribbean Youth Agenda; Engaging Youth on the CSME; Youth Response to HIV/AIDS; and finalizing a draft for a Regional Framework for Youth Governance.