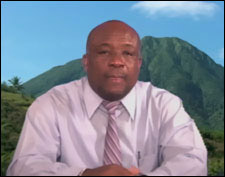 Charlestown Nevis
April 7, 2008
Minister of Health in the Nevis Island Administration, the Hon. Hensley Daniel says this year’s theme for World Health Day, April 7th, 2008 is of particular importance to Nevis.  He said given its small size and the possible negative impact of climate change the Nevis Island Administration (NIA) had taken steps to protect the health of its citizens in light of changes in recent weather patterns.

Mr. Daniel made the statement while he delivered a televised address in observance of World Health Day, Monday April 7, 2008. This year’s theme is “˜Protecting Health from Climate Change.’

“Since coming to office in July 2006 the new NRP government has introduced an Environmental Work Programme to improve the aesthetic value of the country and maintain a clean and healthy environment.  We have re-organised the Solid Waste Management Corporation and improved efficiency in the collection and disposal of garbage.

“We must ensure that ghauts and drains remain open to allow for run-off and prevent flooding.  Constant weather events, variable climates that affect food and water supplies, new patterns of infectious diseases outbreaks, and emerging diseases linked to ecosystems changes, are all associated with global warming and pose serious health risks,” he said.

Mr. Daniel said the NIA had built new roads and had taken great pains to ensure the effect of flooding was minimized by ensuring that the drainage was adequate.  He said the government had ensured that the water courses remained clear eliminating breeding grounds for disease carrying mosquitoes.

He called for greater collaboration between builders, architects, developers, the Physical Planning Unit and Environmental Health Unit for protecting health from climate change.

“The task of all these stakeholder is to find common ground, establish and maintain standards and set out clear procedures, so that we may be able to achieve the goal of protecting health from climate change.

“Many diseases are highly sensitive to changing temperatures and precipitation.  These include common vector-borne diseases such as malaria and dengue; as well as other major killers such as malnutrition and diarrhea,” Mr. Daniel said.

In light of the constant rainfall the island had been experiencing during traditional periods of drought, Minister Daniel further called on the Nevisian community to take special measures that prevented the breeding of mosquitoes which he said could lead to the outbreak of disease.
The Health Minister reminded property owners of their role in safeguarding the environment.  He called on them to clean their properties in an effort to prevent rodents from multiplying and also highlighted related legislation.  For those in farming he said it was absolutely necessary to take cognisance of climate change and put measures in place to avoid soil erosion.

Mr. Daniel said in an effort to reduce pollution from motor vehicles his advised more walking and less driving, particularly in the Charlestown area.

“Walking can reduce obesity and thereby reduce diabetes, hypertension and heart disease.  We cannot expect to pollute the physical environment and hope to sustain good health.  I have said repeated that “˜health is wealth’.  The wealth of Nevis is inextricably bound up with its health.

“The tourism product which includes a clean and healthy environment, pristine beaches and clean air must be maintained.  We must take actions daily to ensure the enhancement of the tourism product.  Let us this day redouble our efforts to ensure the maintenance of a clean and healthy environment to undergird economic development,” Minister Daniel said.