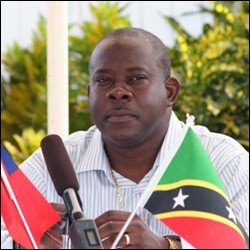 Minister of Agriculture, Land, Housing, Cooperatives and Fisheries in the Nevis Island Administration [NIA] Hon. Robelto Hector, made a call to the island’s farmers to continue to clench the opportunities available for them in Agriculture. This came at the Cades Bay Sweet Potato Field Day ceremony on Thursday 17 December 2009.

The event, which was a collaborative effort of the Ministry of Agriculture in Nevis and the Taiwan Technical Mission, saw remarks by the Agriculture Minister and his Permanent Secretary Dr. Kelvin Daly.

The Minister expressed the NIA’s gratitude to the Resident Taiwanese Ambassador, His Excellency R.C. Wu, for his continuous contribution but seized the opportunity to encourage the farmers.

“I would want to call on the farmers as I always do [to] try and maximize the advantage; make sure that you benefit from whatever is offered. I want to challenge the farmers that your plots too can be as impressive as this mission’s plot. So I ask you to take what is the message today in terms of sweet potato and the tech pack [technical package] and seek to make your farm as productive,” Minister Hector said.

The Agriculture Minister also underpinned the importance of the island’s youth becoming farmers.

“This matter of the replacement of farmers is very important. Some 40.8 percent of our population is under the age of 20. We have a very young population and what I want us to recognize is that as young people, there’s hope for us in Agriculture.”

Meantime, Dr. Daly outlined his department’s plans for sweet potato production and promotion in the upcoming year. Among these plans are to showcase new varieties of potato products and the initiation of an Integrated Pest Management programme geared toward the elimination of weevils.

“We anticipate that in 2010 we’ll be upscaling our production, here on Nevis, for sweet potatoes. We have identified some lands and the Minister has made available 40 acres of land at Low Ground.

“We are deadly serious that we intend to eliminate importing any sweet potato within a year to year and a half. It is something that we should be able to handle on Nevis given the history of our cultivation of sweet potatoes,” Daly said.

The event culminated with a sweet potato field tour and a question and answer segment, which the farmers took full advantage of.