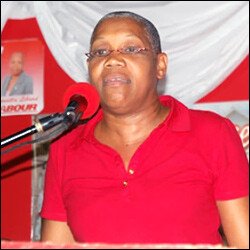 Labour Candidate for constituency #2 Maarcella Liburd has been taken to court by her own neice and nephew over matters involving the administration of the estate of the late Fitzroy Bryant.

The announcement was made by PAM’s lone Parliamentarian the Hon Shawn K. Richards at his party’s final meeting for the 2009

Richards, at PAM’s political meeting in Old Road on Thursday evening (Dec. 17), he highlighted a number of issues from documents filed in the Basseterre Magistrate’s Court against Liburd by the children of her late brother. The court documents claim that she has failed miserably in representing their interests while at the same time refusing to account for monies entrusted to her by her late brother.

A number of pundits evaluating Richards’ speech, which was well received by the crowd, have described the stunning revelation as a delibatating blow to Liburd’s election bid and it adds to the general concensus that she is  one of  the Federation’s most ineffective candidate. They have also advised that, in her best political interest, she should pull out of the race, as her candidacy would certainly be baseless, without merit and ineffective against PAM Representative for Constituency Two, Roy Fleming. Especially after more details of this court matter is revealed.

On a more positive note, Richards told those in attendance that having such information brought to the fore would certainly allow them the opportunity to be able to sensibly decide who they want to entrust the affairs of their constituency to for the next five years. He urged them to ensure that they do not make the mistake of electing Marcella to represent them. He further urged the public to join in the call for her to account for the monies entrusted to her, noting that she has been basing her campaign on the theme, “Stronger Families, Safer Communities”.

“How can she be proclaiming stronger  families when the children of her brother have had to resort to the courts so as to ensure that they retrieve what their deceased father left for them. Despite their pleas and requests, she has failed to give an account of her brother’s estate. So how can she come to you the voters and ask for your vote when the children of her dead brother have suffered at her hands?” Richards asked.

“The question any law abiding, right thinking citizen needs to ask is why was Marcella Liburd able to continue denying her brother’s children the inheritance that he had clearly prescribed in his will? His daughter was forced to abort attending the Covent School because of Marcella’s refusal to continue paying the school fees, thus forcing her to finish off her secondary education at the Washington Archibald High School,” Richards said.

He expressed his party’s willingness to support the two children, in their action that they have embarked upon through the courts as they seek to retrieve millions of dollars that their father, who was a Minister of Government in the former Bradshaw led Labour administration.

Additionally, Richards questioned as to what became of the monies collected from the sale of several properties and valuables that belonged to the Late Fitzroy Bryant, stressing that neither of his children were consulted before or after each sale.

Richards said he is in possession of the court documents and is willing to share it with anyone who intends to call on Marcella to immediately hand over what belongs to her niece and nephew.

“She continues to make huge amount of monies from her contract with Development Bank while her dead brother’s children continue to suffer, as they have had their education and social life severely affected due to her refusal to hand over monies that her dead brother had entrusted to her. How can she now claim to want to represent you and your family?” Richards asked his listening audience.

Richards added that he is prepared and ready to challenge Liburd on the documents which are being aggressively pursued by her nephew and niece in the court. He urged the Labour representative to desist from making wild accusations while failing to respond to serious allegations being levelled against her.

He also noted that despite a court order for her to pay one Kurt Henderson, she has refused to do so, resulting in him taking legal action against her. “It’s evident that Marcella has serious problems and, therefore, I warn you the voters to be aware and  be careful of the promises that she may come to make,” he stressed.

Marcella Liburd is a lawyer by profession and is the former Speaker of the House and current Labour Candidate for Constituency #2. Political observers have declared that this scandal can easily derail an already floundering campaign.

Marcella Liburd and the Labour Party have yet to respond to the Hon. Shawn K. Richards stunning revelation some 2 days ago.