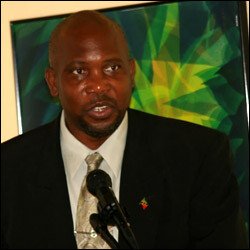 It was important that teachers learnt improved techniques to help them to spread the gospel of renewable energy. Junior Minister with responsibility for Public Utilities, Natural Resources and the Environment on Nevis Hon. Carlisle Powell echoed the sentiment when he delivered the keynote address at the start of a one day workshop for Science teachers in the Federation, on Thursday November 06 at the Mount Nevis Hotel conference room.

The Minister said the NIA took the initiative to educate the teachers in the area of renewable energy, after the University of the West Indies St. Augustine Campus had taken the decision that the population of the Caribbean needed to be educated on the idea of alternative energy sources and the use of teachers was generally accepted to spread the message.

Mr. Powell noted that the NIA had accepted the challenge to educate the Nevis population through the use of electronic and print media and visits to schools which engaged the students through the use of a slide presentation on geothermal energy followed by discussions.

“The response from the children has been overwhelming and they have helped us to sell the message to their parents,” he said.

Notwithstanding, Mr. Powell urged the teachers to play their part to conserve energy and to help the NIA to spread the message of renewable energy.

He said the Administration had fully explored the use of alternative energy forms since it took up office in 2006, to assist with the reduction of the cost of living for the people of Nevis.

In early 2007, the NIA gave permission to the West Indies Power limited to explore for geothermal energy. The company had successfully drilled three exploration wells that have all proved successful.

Mr. Powell said too that based on a schedule provided by the Company, Nevis and St. Kitts should benefit from geothermal energy by 2010.

He said the Administration was also involved in negotiations with Windwatt Power who were at an advanced stage in the process of providing Nevis with 1.1 Megawatts of wind energy.