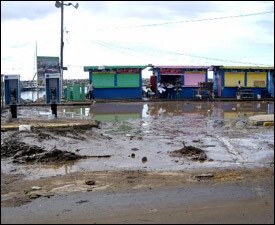 A low-level trough dumped over one inch of rain on St. Kitts Wednesday night causing flooding in Basseterre, bringing down sand and debris and depositing it along West Bourne Ghaut and the Bay Road in the vicinity of the Bus and Ferry Terminal.

One woman, identified as Sandrine “Method” Duncan, had to be rescued after the force of water swept her down College Street Ghut. Several men grabbed her and pulled her to safety.

Public Works Department employees were out in force cleaning up Thursday morning.

The trough of low pressure, which moved over the Leeward Islands, caused conditions to become unstable to the point where heavy rainfall and occasional thunderstorms developed over some of the islands. With the earth already saturated, rainfall triggered flash flooding in low lying areas.

Delver Martin of the Meteorological Services at the Robert L. Bradshaw International Airport said 1.17 inches of rainfall was recorded over the last 24 hours, bringing the total rainfall for the month of November so far to 3.15 inches.

Mr. Martin said 34.92 inches of rain was recorded between January to October this year compared to 27.60 inches for the same period last year.