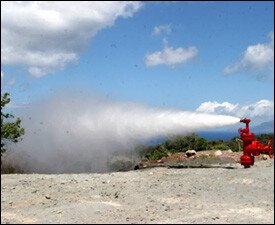 An elaborate system in the Geothermal Resource Agreement that granted geothermal developers West Indies Power Nevis Ltd. permits, licences and concessions for the geothermal resource areas on Nevis, will also protect the environment and the people of Nevis.

Legal Advisor in the Nevis Island Administration Mr. Patrice Nisbett told the Department of Information recently that the most important was the NIA’s grant of concession to WIP.

“What we have done is to grant a temporary concession to WIP whereby through the process of certification by December 31, 2010, WIP will have to establish that there is an economically developable quantity of geothermal resource in the two specified areas, in order for there to be an extension of that particular concession,” he said.

Mr. Nisbett further explained that the certification process had to be conducted by an independent experienced reservoir engineer, in accordance with geothermal resource industry practices.

He said if WIP failed to meet the requirements that were outlined in the agreement, the temporary concession which had been granted would lapse.

The Legal Advisor also pointed to the provisions made in the Contract that would address environmental concerns which he said would protect the people of Nevis and the geothermal resource.

West Indies Power has been mandated under the agreement, to put in place certain bonds in relation to the licensed areas at Spring Hill and in Upper Jessups.

The Company is obligated to post Performance Bonds in the sum of US$125,000 for each area. For every well dug by WIP in its pursuit of the geothermal resource, the Company is required to post a Reclamation Bond in the amount of US$20,000.

Mr. Nisbett explained that the Bonds would provide the government with funds to deal with any difficulties or mishaps created as a result of the activities of WIP in the related geothermal resource areas.

With regard to protection of the resource, depletion provisions were placed on WIP in the Agreement which ensured that the resource was not unduly depleted.

“Also the company is mandated at the permit stage, at the licence stage and at the concession stage, to file with the relevant authority under the Ordinance an updated Environmental Impact Assessment (EIA),” he said.

Mr. Nisbett noted that the Assessment would provide an opportunity for evaluation of the environmental impact of the project on the country at each stage and decisions could be made to ensure that the project was conducted in a manner that was harmonious, conducive and met the best environmental practices in the area of geothermal resource development.