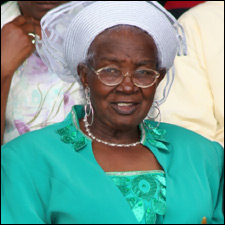 With just one month remaining before the start of the 2011 Pre-Culturama activities, representatives from the 2011 Culturama committee have revealed the winning slogan and this year’s festival’s patron.

In an interview with Culturama 2011 Chairman Mr. Halstead Byron and Manager of the Festivals Secretariat Mr. Antonio Liburd, it was revealed that “Mas, Music, Fun for 2K11! Truly a Cultural Expression!” would be the slogan used “to vigorously market” the annual festival.

The slogan, which was selected from among 51 entries, was submitted by Mr. Shadeo Browne: a resident of Zion Village.

According to Mr. Liburd, Browne would receive a plaque and two complimentary tickets to all activities for this year’s festival.

Meantime, Hamilton Village resident Ms. Eulalie Francis has put a spin on the annual summer festival. Ms. Francis, known in the Nevisian community for her sumptuous local dishes, is the 2011 Culturama patron.

Described, by Chairman Byron, as an avid supporter of Culturama, Ms. Francis is the festival’s first patron to be recognised for contribution to the culinary arts.

“We are very happy that we are able to recognise somebody of this stature, somebody who has contributed so much to the culinary arts: the local food and the promotion of local food and drink and we certainly wish her well as she performs her role as patron for Culturama 2011,” he said, adding that her selection was “a very fitting choice.”

As patron, Ms. Francis would serve as Grand Marshall in the annual Cultural Street Parade and would be present at all Culturama-related activities.

The announcements were made last Monday [May 9] during a televised interview with the Department of Information.