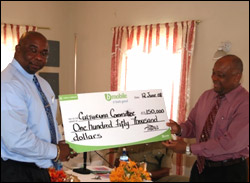 Minister of Culture in the Nevis Island Administration (NIA) Hon. Hensley Daniel and the Nevis Cultural Development Foundation hosted a Press Conference on June 12, 2008, at the Nevis Red Cross Building, to launch the activities for this year’s Culturama festival with the slogan “Participate! Make it Great! Culturama 2K8!”

Mr. Daniel, who was a past chairman of Culturama, spoke of the NIA’s contribution to Culturama 2008.

“From our government’s position; the Cabinet and the Premier and my other Cabinet colleagues, we’re in full support of Culturama and we have given the commitment to host a show by Tempo during Culturama. We are in the process of finalising these arrangements and we expect to have one night of the festival given to Tempo again to add that international flavour to Culturama,” he said.

Chairman of the Nevis Culturama Committee Mr. Halstead Byron, assured the public that plans are well on the way towards making Culturama 2008 bigger and better.

“Certainly we are satisfied at the stage where we are at right now in terms of our preparations.  All of our sub-committees, the Culturama Secretariat and so on have been working hard and diligently to ensure that we put on a very exciting and a big Culturama festival this year,” he said.

Byron added that this year’s festival will feature weekend activities that would begin on Saturday June 14, 2008 with a Street Bash in Charlestown followed by a Beach Bash at Sand Crab Hole on Sunday June 15, 2008.  Other additions to this year’s festival include an afternoon of activities for children dubbed Kids Zone, weeklong Art and Craft Exhibitions, Lunch time concerts and Battle of the Bands.

Tele-communication provider Cable and Wireless; Bmobile is the platinum sponsor of the festival.  Vice President of the company’s Nevis Branch Mr. Jerome Rawlins made the presentation of a cheque in the amount of EC $150,000 to Culturama.

Other sponsorship cheques were presented to the Foundation for the festival came from the Bank of Nevis, Caribbean Cable Communications. S.L.Horsfords and Carib Breweries St. Kitts/Nevis Ltd.

Also present at the press conference were Manager of the Festival Secretariat Mr. Antonio Liburd, Superintendent of the Nevis Division of the Royal St. Christopher and Nevis Police Force Mr. Samuel Seabrookes and Miss Culture 2007-2008 Ms. Shannecia Demming, staff of the Foundation and members of the various sub committees.