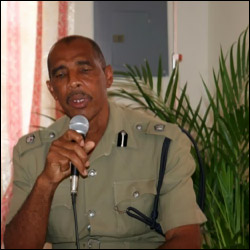 Superintendent of the Nevis Division of the Royal St. Christopher and Nevis Police Force Mr. Samuel Seabrookes, announced that the police would have sole responsibility for security this year and would not tolerate any criminal activity.

“Anyone found with this sort of weapons (guns) will be arrested and charged; no bail period!  So I want to send a clear message out to these people, if they have it in mind to disrupt the Culturama programme, they could change their mind,” Superintendent Seabrookes cautioned during the Nevis National Cultural Foundation’s launch of Culturama 2008 at the Red Cross Building on June 12, 2008.

“I want everybody to have an enjoyable Culturama and we the police officers will ensure that without any fear or favour,” he said.

Meantime, Minister of Culture in the Nevis Island Administration (NIA) Hon. Hensley Daniel registered the NIA’s support for the police and used the opportunity to make an appeal to the public, to refrain from criminal activity during the summer festival.

“We would like our public to understand that what we are seeking to do is to provide good, clean fun for the rest of us; those people who conduct themselves in a decent and orderly manner and that the festival can too, be judged by the level of security that is provided or by the level of incidents that are averted.

“I want to welcome on-board the police and I want to commit from our Administration’s point of view our full support for the police in helping us to guarantee the safety and security for all the revelers,” he said.

Minister Daniel added that the NIA and the Police Force were working together to ensure the festival would be free from crime related incidents.