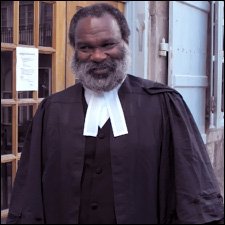 The High Court in Nevis cleared the way for the resumption of the Sharpe Commission of Inquiry on Nevis, when Resident Judge Her Ladyship Ianthea Leigertwood-Octave at a sitting on Wednesday, dismissed all claims brought against the Commission by former Premier of Nevis Mr. Vance Amory.

The decision which quashed the claims of bias and an unconstitutional Commission, by the claimant, was handed down almost four weeks after the conclusion of the two-day hearing which commenced on September 24, 2009.

The Commission was represented by its Lead Counsel Sir Richard Cheltenham and was assisted by Junior Counsel Mr. Jeffrey Nisbett.  Sir Richard was not present on Wednesday’s sitting of the Court.

On the matter of Commissioner Thomas Sharp QC’s relationship with Mr. James Gaskell and the Nevis Island Administration (NIA), the Judge explained that Mr. Sharp in his cross-examination by Counsel for the Claimant had satisfied the Court that he had no prior knowledge of political differences between Mr. Amory and Mr. Gaskell.

With regard to the support staff of the Commission the Judge said no claim of bias was filed in relation to the relationship between Attorney Mr. Jeffrey Nisbett and Legal Advisor in the NIA Mr. Patrice Nisbett. She also said that was no extreme matter that spoke to any bias on the part of the Commission’s Secretariat.

Dr. Henry Stucumber Browne, who represented the Attorney General in the matter, gave reporters his view on the judgment.

“The leader of the concerned Citizens Movement Mr. Vance Amory moved the court alleging the commission of Inquiry established by the Governor General on the advice of the Cabinet of Nevis, was unconstitutional in that they had no power or constitutional authority. In addition to that, it was alleged that Minister Parry who was the Premier, signed the instrument of appointment of Mr. Sharpe QC was designated as minister of commissions that was inappropriate.

“The Judge found that such challenges had really no merit in law, constitutional or otherwise. Having found that, the Learned Judge went on to consider the issue of bias which was the touch stone and core really of the claimant’s case. The judge found that the Commission, as established, was not bias and therefore the claim failed in its entirety. So the way is clear for the government to proceed with the Commission of Inquiry,” he said.

Judge Ianthea Leigertwood-Octave made no order of cost, a position Dr. Brown said he accepted because in his view Mr. Amory’s claim before the court was not frivolous.

“He is entitled to seek the protection of the court if he thinks that his reputation is being unfairly tarnished but there was no basis for that, the court ruled in favour of the government and the Attorney general who I represent. I represented the federal Government and we have succeeded on all the points,” he said.

Dr. Brown described the matter as one which set a precedent but said he was well placed based on past experience to argue his points in the matter.

“The matter is precedent setting, we did have a challenge to a commission of inquiry in St. Kitts where I myself was involved and I was knocked out of that inquiry. So it gave me a good sense of where I was coming from in answering the challenges in this one. So the Commission of Inquiry can commence tomorrow if they see fit,” he said.