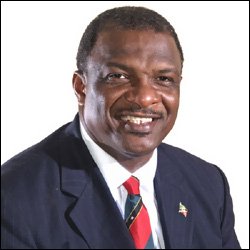 The Federation of St. Kitts and Nevis joined our colleagues of the Food and Agriculture Organisation (FAO) to celebrate World Food Day on 16th October 2009. The focus of the world including the Government and people of St. Kitts and Nevis was on the ways to improve national and ultimately global food security.

St. Kitts and Nevis, through the Ministry of Agriculture, has sought to grow the output of non-sugar agriculture production over the past 14 years with significant achievements in the yield of farmers in each area of the sector.

While the nation has been able to commend our farmers on their contributions to national development and growth, The People’s Action Movement through its Candidate, Mr. Eugene Hamilton and its publication, The Democrat have sought to misrepresent the current landmark accomplishments this nation has made and to discount the role played by a proactive Ministry, Department of Agriculture and the Allied Agencies in formulating and implementing the strategies that bear fruit across thousands of acres of crop and livestock production in this country.

Specifically I make reference to an article captioned “Hamilton Issues Invitation to Liburd”, where the writer and issuer of the invitation seeks to embarrass both the farmers of this country and the hard working staff of the Ministry of Agriculture in an attempt to score cheap political points. Ultimately, I was accused of playing “petty politics” and ignoring the “real issues”.

There is no better time than now to set the record straight and to ask Mr. Hamilton and PAM to present their record and plans for Agriculture in this country and the realisation of food security in the Federation.

Today, under a Labour-led Administration, our nation boasts of more than 500 farmers in the areas of beekeeping, livestock and crop production. It is also worthy to note that more than 250 of these entrepreneurs were former sugar workers who received training and other forms of assistance from the Government.

Added to this the Government has distributed over 5000 acres of land over the past 14 years and has been put in place a policy to provide farms with water at concessionary rates. This not only allows the cost of production to be kept low but also allows for irrigation during dry months and thus facilitating year round production of crops that once ago were seasonal.

Already the Government has assisted in the development of three (3) major commercial farms on the island.  Through this initiative a food crop farmer, a fruit crop farmer and a livestock farmer have began production on 65 acres, 40 acres and 250 acres of land, respectively.

These success stories are unheard of in the era when large tracts of arable lands were hoarded by PAM Ministers of Government and their cabals who kept the lands out of the hands of the people.

It is as a result of the strategic and successful Agriculture Programmes and Marketing Initiatives developed by the Ministry of Agriculture and which facilitates the hard work of the hundreds of farmers in the nation, we have been able to successfully implement and sustain “the desired linkages between Tourism and Agriculture.”

Mr. Hamilton is unaware that thousands of pounds of fresh Kittitian produce are sold to our local hotels and restaurants and also to other markets outside the Federation. One example is the November 2007 Memorandum of Understanding (MOU) signed by the Marriott Resort and the St. Kitts Farmers Cooperative Society. This landmark agreement allows for the local produce of these farmers to be sold to and to be served at the Marriott.  Presently other hotels are seeking similar agreements.

Perhaps the cream of pumpkin soup, which Mr. Hamilton rushes to have each year at the PAM Independence Gala at the Marriott Resort, was made from fresh pumpkin grown by farmers empowered by the proactive initiatives of a Cedric Liburd-led Ministry of Agriculture.

There are no figures from a PAM Administration that compares with 2008 food production figures in this country. There are no figures of PAM that compare favourably with 257,400lbs of tomatoes, 112,200lbs of onions, 525,800lbs of white potatoes, 151,800lbs of pineapples, 378,400lbs of carrots, 237,600lbs of beef and 157,740lbs of pork. All these were produced on lands made available and through initiatives developed by the Ministry of Agriculture.

Before Mr. Hamilton acknowledges progress in the agriculture sector, he is quick to condemn and castigate. He refuses to see the success stories of our farmers who continue to feed the nation, and whose produce is sold at the public market, hotels and in the supermarkets and by roadside vendors.

Short-sightedness has robbed him of the opportunity to see, taste and compliment the preserves that are made by our agro-processors. Fruit and other crops, which once were discarded because of being over-ripe or because they bear external blemishes, are processed into nutritious preserves, which are enjoyed in many households across the country. The government, through the help of the Embassy of China, Taiwan, has promoted to creation of agro-processors and their associations.

These initiatives form part of the St Kitts-Nevis Diversification Project which was developed with the kind assistance of the Food and Agriculture Organisation (FAO), the Caribbean Development Bank in 2002 other regional agencies.  Over the past 3 years the OAS and IICA have sponsored a workshop on the linkage between Agriculture and Tourism during Tourism Month.

In 1980 the People’s Action Movement (PAM) met a well organised Agriculture Sector which included motivated farmers, SSMC Food Crop and a Central Marketing Corporation (CEMACO) also an overseas market in Trinidad and Tobago, Barbados and Antigua. In 15years, PAM neglected the sector and sought to place a stigma on working the soil. They sought to promote trade and tourism unilaterally without understanding a need for positive linkages between the sectors.

While our record is impressive I do believe there are still greater achievements to be accomplished. That is why we are actively pursuing trade initiatives in agriculture, first with our OECS partners and we await the coming into being of the OECS economic union to further open markets to our farmers.

The figures achieved in 2008 and before are benchmarks that we must surpass as we seek to empower our farmers. With the incentives to encourage more nationals to become farmers and to assist existing farmers to expand their businesses, it is our goal to narrow what is a wide yet shrinking balance of trade deficit we accrue in each fiscal cycle, as a developing country.

What we need in this country today therefore is not just rhetoric and criticism that do not lead to greater food security and higher agriculture contributions to GDP. Therefore, if positive ideas can be found in the PAM, the Government and I as Minister of Agriculture welcome open dialogue on those ideas.

However, there is no sign at present which shows that Mr. Hamilton and the PAM intimately understand the policies that guide Agriculture in St. Kitts and Nevis.

Even now as our parties are campaigning ahead of the upcoming general elections, agriculture along with all other issues will weigh heavily on the minds of the voters.  The time is now for Mr. Hamilton to speak to how his party will seek to improve upon the strides made in an agriculture sector that is working. He needs not seek to tear down to build.

Now that the record is clear, I invite Mr. Hamilton to continue the dialogue on the development of Agriculture, and even Housing, Fisheries, and the continued role of Cooperatives in this country. I implore his party to prove that theirs is a genuine interest in Agricultural issues in particular and the needs of the people of this country, in general.

The future demands today’s preparation. In times like these we cannot allow waste words and empty rhetoric to be all that we produce as we seek to engage our people in planning for 2010 and beyond. I am prepared to share my vision of the future and to build upon the realities of today. Mr. Hamilton needs to do the same or he will continue to be guilty of his accusations of engaging in petty politics.