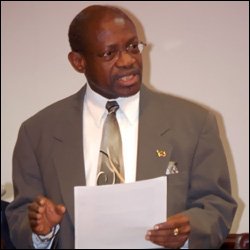 St. Kitts and Nevis Prime Minister Hon. Dr. Denzil L. Douglas told the National Assembly Tuesday that Monday’s decision by the High Court in the Boundaries case is not an indictment on the Federation’s democratic process.

In a statement in the lawmaking body, Dr. Douglas said the Government remains committed to the recommendations of the Commonwealth Assessment Mission.

“I just want to make very clear that the court decision that was handed down yesterday was by no means, by NO means whatsoever, an indictment on the democratic process in St. Kitts and Nevis.  The so-called victory that is being touted by the People’s Action Movement, what I would call a 1% victory, was based on a technicality, was based on an answer to a specific legal question that was put forward by the Claimants.  This question had to do with whether the process by which the Report of the Constituency Boundaries Commission came into being was flawed.  Please permit me to get into the specifics of the Court decision just a little,” said Dr. Douglas.


He explained that the crux of the Court’s ruling is that the National Assembly lacks the competence to enact Resolution SRO 18 of 2006 given that, the Court ruled, there is no enabling legislation provided for in the Constitution.

According to the Court, Section 37 of the Constitution, the section that grants Parliament the power to enact laws, does not explicitly confer this competence.

“What is SRO 18 of 2006?  This is a Statutory Rule and Order (SRO) that was passed in 2006 that grants Parliament the ability to establish a committee system to facilitate the national consultation regarding the electoral reform process.  Thus, my administration, in trying to pass a law that would make the electoral reform process as fair, democratic and transparent as possible by allowing for the input of all stakeholders in our society, became in breach of the Constitution because according to the Court, it had no competence to pass such a Law,” said Prime Minister Douglas.

He noted that as a result, the Boundaries Technical Committee, one of the committees that were established as part of the national consultations on electoral reform was deemed to have no authority since Parliament, according to the Court, lacked the necessary enabling legislation to establish it.

“I just want to let the public know, in no uncertain terms, that the problem that arose with the Constituency Boundaries Report and the Proclamation was a technical one, one which, can be rectified and most likely should be, given the urging of the Commonwealth Assessment Mission that, “˜ A review of the boundaries and constituencies is long overdue and necessary in light of population shifts and growth in some constituencies, physical developments and the disparity in representation occasioned by urban/rural differences”¦It is clear that the boundaries should be reviewed as soon as practicable by the Commission.’ I hope all at home are committed to this, just as the CARICOM and OAS are also committed to assist in its completion,” said Prime Minister Douglas.

He told the lawmaking body that the people should not allow themselves to be confused by the allegations currently being launched by PAM both nationally and internationally that democracy is not alive and well in St. Kitts and Nevis.

“Because, the truth of the matter is that the Court did not just make the one ruling.  The Court also explicitly stated that, “”¦ the general allegations, [made by the claimants PAM], in particular, the pleading and affidavit evidence with respect to bias, bad faith, and improper purposes are insufficient. Thus, in layman’s terms they did not submit substantive evidence to support these claims, and they were rejected by the Court,” said the Prime Minister.

He said that the people of St. Kitts and Nevis must not be fooled and urged them to read Constitution, the Court decision and SRO 18 of 2006.

“Democracy is alive and well in St. Kitts and Nevis, and where the government has been found to have erred it was in pursuit of democratizing the process of electoral reform,” said Dr. Douglas.

He accused the opposition People’s Action Movement (PAM), which has one seat in the 15-member lawmaking body of “standing in the way of democracy in St. Kitts and Nevis.”

The PAM Party has never accepted defeat from the St. Kitts and Nevis Labour Party since 1995.

“I am not surprised by their attempts to bamboozle the public because they believe that they have been destined to rule this country.  But I would submit that they are the ones who prevent democracy in this country by not presenting a viable alternative, or vision that would capture the imagination of the people of St. Kitts and Nevis and win them a victory in the ultimate arbiter of democracy, the People’s Court,” said Prime Minister Douglas.