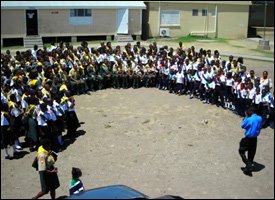 The Seventh Day Adventist Church (SDA) on Nevis has been commended for its efforts to keep its young members in check and grounded in a community where many youths had been lost to anti social behaviour.

Deputy Premier and Minister of Youth Hon. Hensley Daniel’s commendation came on Friday when he addressed a number of church officials and youths at an SDA Consecration Service at the Villa in Charlestown. The event was held under the theme “Fashioned by His Hand – Restored by His Love – Reflecting God’s Image”.

He said the society had been confronted with youths who had turned to anti social behaviour – crime, drug abuse and violence – and he challenged the youths to reach out to each other in Nevis, St. Kitts and the wider Caribbean to join in doing something constructive and meaningful to ward off gangs and violence.

Mr. Daniel told the Pathfinders [youth arm of the church] that he visited the Prison on Thursdays and all the inmates used to attend or belonged to a church.

“Maybe we might ask ourselves who lost them, we or them?ï¿½I am hoping that as we go forwardï¿½that the church and the youth arm of the church will ensuree that we reduce the numbers so that we don’t have to end up as we are now saying in our community that we have to build a new prison.

As Mr. Daniel urged the church to help reduce the number of youths who got incarcerated, he explained that when he looked at the 240 inmates at the prison, he saw among them youth, a sea of humanity and a terrible waste of human resources.

The Minister was of the view that the Pathfinders Camp was in preparation for the battle against the evil forces in the society but told the participants that they should not let their guard down.

“Our charge and your charge as Pathfinders must be to make sure that you keep all [your] talents burning] so that I do not have to ask for more money to curb anti-social behaviour.

“If all the 57 churches on Nevis get on fire like you I would have no problem, I would have to spend far less money and so I ask you to keep nurturing the talent of the young and ensure that we have a community for peace and founded on peace and justice so that we can have, for us, a good and great society,” he said.

Mr. Daniel noted that it was important for the society and churches on Nevis, to express and demonstrate love to one another.

“Let us build corridors of hope, let us build bridges of peace and love with all the other religious communities in Nevis so that we can have one Nevis because I hear in heaven everybody is going to be together so let’s practice it on earth,” he said.