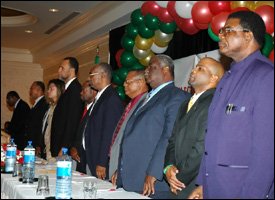 St. Kitts and Nevis is on the final leg of the electoral reform process.

He said he has been informed that the work of the Constituency Boundaries Commission is not completed.

“I am told that the iniquities in the boundaries need to be corrected. In St. Christopher 8 for example, we have 4,193 voters registered in February. In St. Christopher #7, we only have 2,291. There is a need to look at the situation in all of the other constituencies both in St. Kitts and in Nevis and corrections made before the election date is announced,” said Dr. Douglas.

“Like you, I am looking forward to the outcome of the deliberations of the Constituency Boundaries Commission for I am anxious to ring that red bell,” he said.

The Electoral Reform Process was informed by a White Paper that was laid in the National Assembly.

Parliament has amended the National Assembly Election Act to give legal effect to various improvements in the entire system.

“We can now boast of a brand new electoral system fully computerised, and a National Identity Card with a photo, that will ensure nobody could vote in your name and that you get the Government you want and the Government you deserve,” said Prime Minister Douglas, who stressed that electoral reform is another part of the change that his St. Kitts-Nevis Labour Party Government is implementing.

“We could not agree to disenfranchise any of our nationals. We could not agree to take away the right to vote from a person who was born here but left to go overseas, who continues to save here, who continues to support their family here, who come here every year to celebrate our festivals, and who purchase homes here for their retirement. Much blood was shed for the right to vote and the Labour Party and this Labour Government will not arbitrarily take away the right of any Kittitian or Nevisian to vote,” said Prime Minister Douglas.