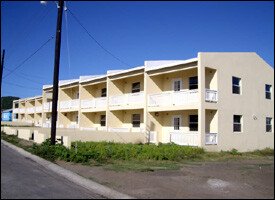 Dr. Douglas’s St. Kitts-Nevis Labour Party Government has built over 2,500 homes between 1995 and present, compared to 200 constructed by the People’s Action Movement (PAM) during its 15 years in office from 1980 to 1995.

“My administration’s housing initiatives have borne fruit and have impacted lives. It does not have to take the Caribbean Development bank (CDB) Assessment Report to tell you that. Just look around and compare the houses you see now to the houses that existed in 1995 and the whole story of Labour’s positive ongoing change in the housing sector will be immediately apparent. There can be no doubt that Labour is about change ““ positive change; continuing change, real change; good change,” said Dr. Douglas.

Saying that his Labour Government’s expansive housing projects must continue, Dr. Douglas promised his Administration will not rest until there is not even one poor family in St. Kitts and Nevis.

“We understand that these programmes cost money that is very limited in this time of global crisis, but we know our priorities and our motto in financial management is prudence, efficiency and diligence. We are doing everything to cut waste in the public sector and to keep a tight lid on administrative expenditure so that the limited resources available can be used to bring about real change in the lives of our people,” said Dr. Douglas.