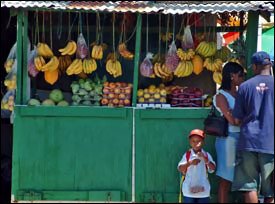 Director of Agriculture on Nevis Dr. Kelvin Daly applauded Nevisians for their efforts to utilse local agricultural produce. He said the public’s response to a buy local, produce local and eat local campaign of the Nevis Island Administration (NIA) through the Department of Agriculture in 2007, had so far been overwhelming.

He made the disclosure during a recent interview with the Department of Information. He said too that there had been a number of new farmers who had come on board and continued to come forward, who had expressed their intention to move into commercial farming.

“Since 2007 when we really started in earnest, to encourage local production the response has been really overwhelming. We have a number of new farmers who have come on board and they continue to come forward”¦these are guys are looking to get to commercial size. The backyard quarter acre is not sufficient for them anymore so they are looking for two and three and four acres to plant food,” he said.

The Director noted that to date the island had done fairly well in the area of self sufficiency in a number of crops notably tomatoes, cabbage, pumpkins, squash, sweet corn and in some areas of meat production

Dr. Daly explained that the NIA through the Department of Agriculture had put a number of measures in place to facilitate farmers in particular the new ones for an increase and sustained production.

He said the Department would render whatever services they had available and would include ploughing services free of cost, fencing  and drip irrigation at subsidised rates or on credit, hole digging, in some cases land preparation, advice on what to plant and where to plant, all of which were a part of the Departments stock and trade.

“It is all to encourage new farmers in the game, without them having to put out the entire expense of getting started because it is quite a bit of money.

“So whatever we can do, we always encourage new farmers to come on board and talk to us first. We are not trying to steal their plans we are just trying to make sure they don’t make the mistake other farmers have made in the past and so far persons have come forward interested in planting tomatoes, cabbage lettuce  and pumpkin,” he said.

Notwithstanding, in the area of crop production, Mr. Daly said though the perpetual problem of monkey and other pests was still present, the Department was in the process of  hosting a national consultation at the end of May which would address the way forward to tackle the matter.

However, since the Department began the promotion of potted gardens at the 2008 Open Day in May, the idea had captured the interest of many persons who had taken up the challenge to become more sell sufficient.

“So far persons have been calling the Department and they are interested very much in our potted gardens. Persons who normally planted flowers are now looking for ideas on how to plant some stuff that they can help themselves with peppers and tomatoes.

“We had quite a bit for sale at the Open Day and most of them were sold on the first or second day so persons have been taking up the challenge to be a little bit more self sufficient especially in today’s increasing world food prices. I think the ability to be in control of ones own production is what is exciting for them also so we do get a lot of responses from that,” he said.