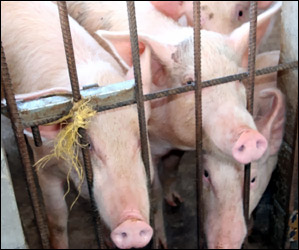 Sorry for that, but I just could not resist that…too much coffee I fear :)

A top official in the Department of Agriculture on Nevis said, that at present, the island was enjoying self sufficiency in the area of pork production and a ban had been placed on importation.

In a recent interview with the Department of Information, Director of Agriculture on Nevis Dr. Kelvin Daly said that farmers were enjoying the benefits from the ban and had begun to see returns on their investments.

“We have a ban in place right now on pork so all our local pork is on the market and the farmers are very happy about that for the first time in decades anybody has banned pork. We [Department of Agriculture] felt it was time because when we did the analysis of the pork characteristics, it is very lean, very clean, very up to speed and better than any thing you can import.

“So we felt it was about time that we had sufficient quality meat on the market to put a ban in place and it has worked wonderfully the vendors are not complaining, the farmers are very happy that they are getting their animals sold because as you realise, the feed prices are quite high and again the government here has subsidised feed prices substantially,” he said.

Dr. Daly noted that the Nevis Island Administration (NIA) had been the backbone of Agriculture on Nevis and had provided subsides to the farmers which has enabled them to enjoy profits.

He explained that the government paid the workers at the Abattoir to process all the items on behalf of the farmers and the situation at present was such that the farmers were in a good position to get maximum amount of returns on their investment in agriculture.

The Director of Agriculture noted that the Department’s job was to ensure that the farmers in Nevis were well looked after and pointed to the plans in place to further assist livestock farmers.

“What we have done, we are putting a proposal together to expand the storage space at the Abattoir so farmers don’t have to hold on to their animals too long. They can have them processed at any time and have the carcasses stored rather than have to feed and wait to get one sold live.

“So the government is investing a lot especially in human resource development to make sure the farmers products get to the market and get to the Nevisian public in good condition, in a safe way and I think they should be applauded because they have done and excellent  job in supporting the industry here in Nevis,” he said.

Dr. Daly explained that the Abattoir had been processing a range of wholesome products which had been well received by the public and the Tourism Sector.

“For the organic meats overall it [the response] has been overwhelming. What we do in the Department’s Abattoir Division, we do not use any growth promotants in the feed, we do not use stimulants in the feed, its grass fed or grain fed animals. Most persons here in Nevis, livestock farmers in general, are not even aware of the things they can do to enhance the growth of animals which is good.

“What we do in the Department, we encourage persons to eat from the Abattoir’s products. We have ground beef, patties and these are not what you get from the States these are not trimmings. You get a whole animal strip it down to the bone grind the flesh and make patties very low in fat, very high in proteins very nitrous and very safe to eat”¦ We sell a lot of ground beef through the vendors in Nevis and a lot of hamburgers. As a matter of fact, we can’t keep up with the hamburgers request because so much of it is being sold. It is a wholesome product,” he said.

Dr. Daly explained that production was not done en mass that would concern the public about e.coli poisoning or salmonella. He said post and anti mortem inspections were done by the Abattoir’s highly trained staff.

“We do post and anti mortem inspections of the meat we have highly trained people at the Abattoir working and the response from the hotels for example Montpelier and Hermitage in particular, they have been very, very pleased with the product,” he said.