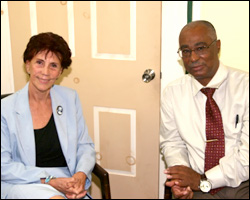 Premier of Nevis, Hon. Joseph Parry said farewell to Cuban Ambassador to St. Kitts-Nevis H.E Ana Maria Gonzalez Suarez on Monday at his Bath Hotel office. He thanked her for her work in Health Care, Education, Sports and Culture.

Mr. Parry acknowledged the accomplishments of the outgoing ambassador at a farewell reception held in her honour at the Frigate Bay Beach Resort conference room, hosted by Prime Minister of St. Kitts-Nevis the Hon. Dr. Denzil Douglas.

Ambassador Suarez began her tour of duty on November 9th 2005 as the resident Cuban Ambassador to St. Kitts-Nevis.

“She has aggressively built on the initiatives initiated by her country and undertaken new initiatives that have further deepened relations between our two countries,” Mr. Parry said.

Those initiatives included increased links between Nevis and Cuba through Health Care services, the provision of Sporting activity techniques in international competition and the availability of scholarships for Nevisian students to pursue university education in Cuba.

During the brief meeting, attention was given to the development of programmes that had made available medical practitioners to the Alexandra Hospital in the areas of Ophthalmology, Physical Therapy, Dentistry and Anesthesiology.

Among other accomplishments during Ambassador Suarez’s tenure was the historic congenital cataract surgery which was performed on a one-year old Nevisian child, by a Cuban Ophthalmologist.

Ms. Suarez said she was honored to have served Cuba as Ambassador to St. Kitts- Nevis, which had led to the further strengthening of mutual ties based on common values and beliefs.

Her departure leaves room for the appointment of a new Cuban ambassador to the Federation of St. Kitts and Nevis.