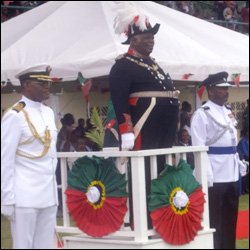 Following the approval of the legislation in the National Assembly on Thursday 5th November 2009, the Act was assented to by the Governor General His Excellency Dr. Sir Cuthbert Montraville Sebastian.

According to an (Extra Ordinary) issue of the St. Christopher and Nevis Official Gazette, the Governor General assented to the Act on 6th November 2009.

Deputy Speaker, the Hon. Patrice Nisbett and the Clerk, Mr. Jose Lloyd signed the Act, certifying its passage in the lawmaking body on Thursday 5th November 2009.

The National Assembly Elections (Amendment) (No. 2) Act, 2009 makes provision for candidates seeking election to the National Assembly to declare on oath or affirmation that they are duly qualified in accordance with the Constitution of St. Kitts and Nevis.

Section 28 of the St. Kitts and Nevis Constitution given the twin-island Federation on gaining independence under the Kennedy Simmonds’ People’s Action Movement Administration on September 19th 1983 forbids persons who “˜by virtue of his own act, under any acknowledgement of allegiance, obedience or adherence to a foreign power or state’ from becoming members of the National Assembly.

In accordance with the 1983 Constitution, candidates will also be required to declare that he or she is not a minister of religion, is not an undischarged bankrupt, having been adjudged or otherwise declared bankrupt under any law;  is not a person certified to be insane or otherwise adjudged to be of unsound mind under any law, is not under a sentence of death imposed by a court of law in any part of the Commonwealth nor is serving a sentence of imprisonment (by whatever name called) exceeding twelve months imposed by such a court or substituted by a competent authority for some other sentence of imprisonment the execution of which has been suspended.

He or she is also to declare they are not disqualified for membership of the National Assembly by virtue of any law of Parliament by reason of (a) been convicted of any criminal offence that is connected with the election of Representatives or members of the Nevis Island Assembly; or (b) been reported guilty of such an offence by a court trying an Election Petition.

The legislation retains the provisions that the candidate is not disqualified for membership of the National Assembly by any law of Parliament by reason of (a) holding or acting in any office or appointment specified by such law, (b) belonging to any defence force or to any class of persons so specified that is comprised in any such force and (c) belonging to any police force specified by such law or to any class of person so specified.

A candidate who commits an offence under the Act shall be liable on summary conviction to a fine not exceeding EC$30,000 or to a term of imprisonment not exceeding five years or to both such fine and imprisonment.

The candidate shall not be qualified for a period not exceeding five years following his or her conviction or as the case may be, following a report of the court hearing an election petition as may be so prescribed to be elected or appointed as a Member of Parliament.

The legislation provides for a person who nominates a candidate for election who commits an offence under the section shall on summary conviction to a fine not exceeding EC$20,000 or to a term of imprisonment not exceeding five years or to both such fine and imprisonment.