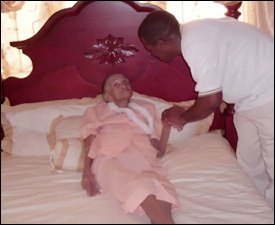 In line with its mission to empower and care for the elderly, the Ministry of Social Development and Gender Affairs recently joined with several senior citizens to celebrate their lives.

Dieppe Bay resident and Centenarian Mrs. Violet Gumbs on August 03, celebrated her 102nd birthday. Family members relayed that Ms. Gumbs had been praying and asking God to reach her 100th birthday and thankfully she had reached it and much more.  Also in celebration of her achievement, the Gumbs family participated in a service at the Anglican Church in Dieppe Bay, one of the many religious establishments where Mrs. Gumbs played the organ for many years.

Mrs. Lillian Hill of Tabernacle, now 99 years old, celebrated on July 31, but is complimented on appearing to be in her 80s.

Mrs. Sylvia Cannonier of St. Paul’s, who attainted 70 on August 02, was especially delighted when some members of her family came from the United Kingdom, the United States Virgin Islands and further afield. They held a surprise birthday party in her honour.

Hill’s granddaughter, referred to as “˜Baby J’, coordinated a church service at the Pentecostal Church in Tabernacle, and a family luncheon to mark the occasion.  Minister of Social Development Honourable Rupert Herbert attended.

Social Assistance Supervisor Mrs. Ann Wigley, offered congratulations to the seniors on reaching these important milestones and wished them many more years of life. “If every person in our community will show the same level of love and care for the elderly as these people have shown to their families, things in our society would be much better,” said Mrs. Wigley.