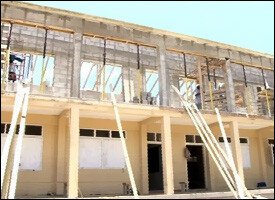 A number of persons have been benefiting from construction works on the island. Some of the jobs include government projects, a part of the Nevis Island Administration’s (NIA) stimulus package, designed to provide a sustained source of revenue for Nevisians during the world recession.

During a visit to the work site on Monday, Contractor Mr. Keithley Tross told the Department of Information that though the current labour force to construct new classrooms on “Block C” called for two additional workers, the roofing phase would engage a greater number of new workers.

“The roof is subcontracted out to Mr. Anthony Burkley [and] that section of the project will have quite a few workers but they are on another job so they are not going to come back in until we are ready for putting on the ply and galvanise,” he said.

The roofing stage which commenced later in the week was expected to be completed next week.

The $1.3million expansion project would entail construction of four additional classrooms on a second floor and a remodelled staff room. Work on the staffroom is expected to commence on completion of the classrooms which are scheduled to be completed in time for the start of the new school year in September.