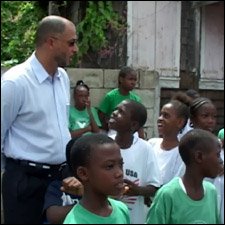 The personal, economic and social benefits offered by sports was stressed by the Minister of State for Sports Honourable Richard Skerritt, as he highlighted the remarkable and unifying spirit of the Olympics, on Monday.

While giving an address for the commemoration of Olympic Day, Minister Skerritt said the “International Olympic Movement, and all that it represents, symbolizes the value of sport as an instrument for peace, unity and human development.”

“Here in St. Kitts and Nevis, our Sports Department honours and promotes the Olympic ideals while seeking to utilize sports for the holistic development of “¦ young people in particular, and our society in general,” he continued. “We believe that organized sports provide a healthy alternative to the antisocial distractions of teenage pregnancy, drug abuse and violence, which too many of our young have fallen prey to in their misguided choice of lifestyle.”

“The virtues of the Olympic Movement remind us that the process involved in seeking to be the best we can be on the sports field, can also help us to develop the right attitude and skills for managing the challenges that confront us in real life, off the field,” said Minister Skerritt.

Mention was made of Government’s large investment in sporting facilities around the country including the Warner Park Sports Complex and the Silver Jubilee Athletics Stadium, which has earned St. Kitts a solid reputation as an international sports venue.

The Minister of State also recorded his pride at seeing top local track and field athletes including former World Champion Kim Collins compete at the National Championships on Sunday, June 21.

“The future of sports in St. Kitts and Nevis is therefore extremely promising, but it is up to us as a people, to ensure that our country will continue to excel and to reap good returns from our heavy investment in sports facilities and in the development of our young people,” Minister Skerritt stressed.

Commendation was also expressed to the St. Kitts and Nevis Olympic Committee for its role of advancing sport within the Federation and for sustaining an essential partnership with the Ministry of Sports.

In January 1948 at its 42nd Session in St Moritz, Switzerland, the IOC approved the idea of an Olympic Day to commemorate the creation of the International Olympic Committee on June 23, 1894 in Paris.