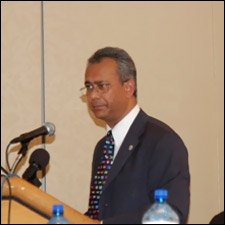 Assistant Secretary General of the Organisation of American States (OAS), His Excellency Albert Ramdin has warned that the growing prevalence and severity of crime in Caribbean societies is cause for major concern and cannot be left unchecked.

“If our countries are to progress toward sustained and sustainable development, the issue of crime and violence has to be faced head on,” Ramdin said at the opening session of two-day regional conference, organised by the government of St. Kitts and Nevis, under the theme “Confronting the Challenges of Youth Crime and Violence in Society: Defining a Multi-Sectoral Response” at the St. Kitts Marriott Resort.

Noting that crime and violence represent pressing social, development and governance challenges for the governments and people of the region, Ramdin called for shared responsibility and greater coordination to address the problem.

“An effective approach to confronting and reversing the rise in crime and violence cannot be only government-centric. If we are to make inroads to reducing and preventing violence our approach should be comprehensive and include all stakeholders in society: government, legislative bodies, judiciary, law enforcement, schools, the business community, non-governmental organizations, religious organizations, and youth groups,” Ramdin said.

He further observed that it is important to address not only the symptoms of crime and violence but also to analyze and address the underlying structural causes of these problems. In this regard, he emphasized the importance of promoting a culture of peace and non-violence as an intrinsic part of the development and democracy agenda.

Advancing an innovative approach, Ramdin pointed out that the “fracturing of our societies as a result of violence calls for a committed effort to advance a process of social cohesion within countries and throughout the region.” In this regard, he called on ministers of government, Heads of regional law enforcement agencies, representatives of international organizations and civil society organizations attending the conference to “transcend differences and embrace initiatives and best practices that work.”

He also highlighted the leading role which the OAS has played by fostering the emergence of regional security mechanisms and the creation of spaces for dialogue and coordination among countries, and the organization’s ongoing commitment to accompany the process. He also mentioned a recently launched OAS initiative which aims to establish a regional Caribbean Observatory on Gangs.

Photo: Assistant Secretary General of the OAS, His Excellency Albert Ramdin (speaking) at the Opening Session of the Caribbean Conference on Youth Violence and Crime at the St. Kitts Marriott Resort. Seated is St. Kitts and Nevis’ Permanent Reprrsentative to the OAS, His Excllency Dr. Izben Williams who chaired the ceremony.