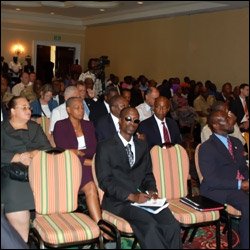 St. Kitts and Nevis Prime Minister Hon. Dr. Denzil L. Douglas said Monday there is a need for a constructive plan of action that would bring together a cross section of stakeholders in the form of a national commission for reduction of crime and violence.

“It would mean placing emphasis equally on providing our law enforcement services with the training and ammunition to combat crime as well as to promote community policing.  It would mean establishing a rapid response mechanism regionally so as to foster greater functional cooperation in fighting crime and fostering crime prevention,” Prime Minister Douglas told the Opening Session of a Regional two-day Conference on Youth Crime and Violence Prevention.

He said the establishment of a regional crime and security architecture under the Council of National Security and Law Enforcement and complemented by the implementation agency for Crime and Security (IMPACS) is a useful regional endeavour for functional cooperation.

“No where is this better illustrated than in the events leading up to the Cricket World Cup in 2007 where security arrangements including common surveillance, mass emergency, health and safety programmes, among others, remain as legacies on which the Region could build sustained and sustainable policies on crime and security,” said Dr. Douglas, who pointed out that another regional model that needs to be adopted more widely is the drug demand programme coordinated by the CARICOM Secretariat which aims at a series of interventions geared towards youth as well as adult to prevent and reduce their involvement in drug use and abuse.

He said that the issue of substance abuse has also to be confronted with policies and programmes to mitigate its lasting effects and devastating consequences for individuals and our societies.

“The strategy taken as a whole makes perfect sense and provides a useful model that can be rolled out at the national level. The problem for us in St Kitts and for most countries in the OECS and perhaps elsewhere in CARICOM is capacity, both human and financial to execute this plan at a national level,” Dr. Douglas told the opening session attended by St. Kitts and Nevis Governor General, His Excellency Dr. Sir Cuthbert Sebastian; Prime Minister of Trinidad and Tobago, the Hon. Patrick Manning; Deputy Prime Minister Hon. Sam Condor and Ministers in the Federal Cabinet; Speaker of the St. Kitts and Nevis National Assembly, Hon. Curtis Martin; Leader of the Opposition in the Federal Parliament, Hon. Mark Brantley; CARICOM Secretary General, His Excellency Dr. Edwin Carrington, Assistant Secretary, His Excellency Albert Ramdin and Deputy Premier of Nevis, Hon. Hensley Daniel.

“The longer the exposure to interventions, the greater the positive response.  Treatment and rehabilitation recognizes the value of the life of substance abusers and gives each another chance to recover and be re-integrated into his/her community.  Secondly, there are many persons who need to access treatment and are denied because of the absence of programmes to meet their specific needs (amazingly this is the case for women and children); and due to stigma and discrimination, especially against the street and homeless addicts,” said Dr. Douglas.

Pointing to a recent study by PAHO on Health risks behaviour of youth 13-15 years in the Caribbean where statistics indicated that as high as 40 percent use alcohol, 30 percent have used drugs; as high as 50 percent of boys and 25 percent of girls have sexual intercourse and a range of 12 to 25 percent have contemplated suicide, Prime Minister Douglas said it was clear that these problems can only be effectively tackled by the establishment and implementation of partnerships that involve the private sector, civil society, the law enforcement and protective services, as well as, the international agencies through technical and programme support.

“It also requires an inter-sectoral approach involving education, health, youth, gender, culture together with our Ministries of planning and finance in implementing educational and promotional programmes to deal with behavioral change.  It also requires more sustained research on the part of our higher educational institutions that provide the basis of policies that could help to reverse the adverse effects of crime and violence in our societies,” said Dr. Douglas.

He said that these adverse effects translate into social costs that negate economic growth in general and attempts to improve health status and reduce poverty.

1 thought on “Caribbean Needs To Reduce Violence For Tourism”