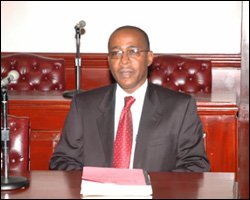 St. Kitts and Nevis’ Minister of Energy, the Hon. Dr. Earl Asim Martin is in the United States to attend a meeting of Western Hemisphere Energy Ministers, Civil Society and the Private Sector at the Energy and Climate Ministerial of the Americas in Washington D.C.

The April 15th and 16th meeting is attended Ministers from the Caribbean and Latin America and is hosted by United States Secretary of Energy, the Hon. Steven Chu. It is taking place at the headquarters of the Inter-American Development Bank (IDB) and the Organization of American States (OAS). United States Secretary of State, Hon. Hillary Clinton is expected to address the forum.

The meeting was called by the US Department of Energy following the announcement by US President the Hon. Barack Obama of a proposed Energy and Climate Partnership of the Americas (ECPA), at the Fifth Summit of the Americas held in Trinidad and Tobago in April 2009.

The ECPA brings countries across the Western Hemisphere together to facilitate the acceleration of clean energy development and deployment, advance energy security, and reduce energy poverty by sharing best practices, encouraging investment, and cooperating on technology research, development and deployment. ECPA is shaped by the desire for energy efficiency, renewable energy, cleaner fossil fuels, infrastructure, and energy poverty.

Minister Martin is expected to present aspects of St. Kitts and Nevis’ Renewable Energy Programme focusing on the attributes, existing and planned uses of the country’s renewable resources, activities being taken to articulate the Federation’s energy policy and the legislative framework for renewable energy resource exploration and exploitation.

The Ministerial meeting was preceded by a half day preparatory meeting on Caribbean Sustainable Energy led and organised by the OAS.

According to a statement from the US Department of Energy, leaders of the Western Hemisphere recognize that “energy is fundamental to sustainable development and they are committed to expanding cooperation to address the urgent and intertwined challenges of energy security and climate change.”

Joining ECPA is voluntary, and allows governments, Inter-American organizations, private industry, and civil society to lead or participate in initiatives that reflect their priorities. Governments may work jointly or on their own to lead initiatives, finance activities, and/or create welcoming policy environments that encourage low carbon development. Countries will be encouraged to identify areas where they can contribute or where they need assistance, or to collaborate and share on the OAS -ECPA information clearinghouse website.