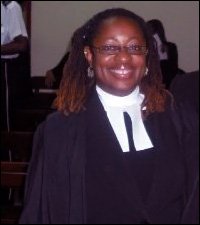 President of the OECS Bar Association, Kittitian Mr. Tapley Seaton, Q.C. has condemned the shooting in St. Lucia, of the Jamaican-born magistrate, Ann-Marie Smith, who was shot by armed assailants.

“The vicious attack on Magistrate Smith”¦represents an attack on the justice system, the very institution in place to provide protection and relief to persons who have been wronged and who are the victims of law-breakers. It reflects a new and extremely dangerous level of crime in the community,” Mr. Seaton said in a statement carried by CMC News Barbados.

He said what is even more disturbing is the fact that the incident in St. Lucia “comes just weeks after a police prosecutor was gunned down by criminal elements. Regrettably, he did not survive.”

Mr. Seaton said these two incidents seem to reflect a developing pattern of organised and targeted criminal activity in St. Lucia aimed at obstructing the justice system and creating an atmosphere of fear in the community.

“The OECS Bar calls for a swift and thorough investigation into the shooting of Magistrate Smith and the recent shooting of the police prosecutor. We urge the St. Lucian Government to inject the necessary resources to facilitate an efficient and effective police investigation.

“˜We call on the police to spare no effort to ensure that the perpetrators are brought to justice,” said Mr. Seaton, adding that the incident highlights the “need for adequate security and protection of our judicial officers in St. Lucia and elsewhere.”

Smith was treated for bullet wounds to her thigh, leg and buttocks and released from the St. Lucia hospital over the last weekend.

Eyewitnesses said the magistrate, who has gained a reputation in St. Lucia for being tough on criminals, was entering her car to go to work when she was attacked by two masked gunmen who jumped from nearby bushes. Smith’s five year-old daughter was also in the car at the time of the incident.

Magistrate Smith accelerated while blowing her horn as the gunmen fired shots into her vehicle, which ran into a drain, eyewitnesses said.

Smith’s landlord told the Caribbean Media Corporation (CMC) that after hearing the commotion, he rushed from inside his house to the balcony and fired three shots into the air.

The gunmen fled the scene discarding their ski-masks in the process. The masks were later retrieved by police.