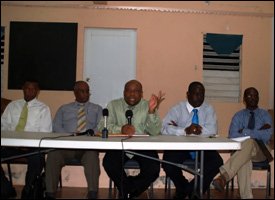 In a Town Hall meeting Chaired by Mr. Eustace “Smarty” Nisbett and broadcast live on Choice FM Nevis radio, Deputy Premier and area representative of St. John’s, the Hon. Hensley Daniel says that significant steps have been made to empower the young people of his constituency, over the last two and a half years, irrespective of political or socio-economic circumstances.

Speaking at a recently held Town Hall meeting at the Brown Hill Community Centre, Minister Daniel spoke to the number of small businesses that were granted concession to enable them to operate.  He also spoke of the various opportunities for education and training made available to the young persons of the area.

In addition, Mr. Daniel expressed his elation with the success of the Nevis Reformation Party led Administration in attracting Bell Canada-Brown Hill Communication Center to the area, which currently employs 130 persons with another 20 expected to be employed shortly.

In continuing discussions about the hard work and vision of his government relating to projects and programs geared towards Brown Hill,  Minister Daniel also talked about the Cherry Gardens affordable housing project currently under construction and is envisaged to accommodate some 130 first time home owners.

While discussing sporting activities, Minister Daniel noted that in 1991, the Nevis Reformation Party (NRP) purchased land from the Thompson family and recently additional lands were purchased in Brown Hill to further accommodate other sporting facilities.

During the question and answer period several attendees expressed their satisfaction with the performance of the Government and Deputy Premier, Hon. Hensley Daniel.