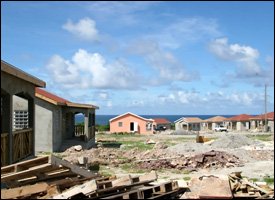 Some one hundred and forty-two (142) homes have been provided the people of Nevis over the past two years by the Nevis Housing and Land Development Corporation, which is currently observing its twenty-fifth (25th) anniversary.  This was told the Department of Information on Thursday February 5, by the Minister of Agriculture, Housing, Lands, Coorporatives and Fisheries, the Honourable E. Robelto Hector.

“The Corporation, since in 2006, we’ve [NIA] sought to have greater efficiency and transparency. Our record keeping – we sought to improve upon, ensuring that there is a data base for each house that is built by the Corporation.  In our anniversary year, which is this year, some 25 years after the corporation would have been a legal entity and I am happy to say that the vision of those who came before us must be recognized.

“We have seen since 2006 the Corporation being a major employer.  In the area of housing, some 142 homes on the island of Nevis.   We are in a position to acknowledge that this government has done a great deal in the generation of employment and ensuring housing,” he said.

The Housing and Lands Minister also credited the Nevis Island administration for initiating the idea of affordable housing.  He recalled that it was in 1984 that the Nevis Housing and Land development corporation was established, with the sole purpose of ensuring land was made available and a supporting element of that would have been the provision of housing.  He said since 2006, they had expanded the corporation’s programs once again.

Minister Hector emphasized that under the new dispensation of  Nevis Island Administration, the government had sought to assist civil servants in their housing needs.

Mr. Hector also spoke of the Nevis Island’s Administration’s vision to increase the land stock on the island of Nevis.

“We have purchased five acres in Bath to make more land available. Eighteen acres of land in the Hickman’s area and we are negotiating with another person to purchase about 15 acres of land. Little was done in the past to increase the land stock in terms of development.

“Again I must say that the Pinneys Development area which was a project is a commercial area and housing area Nugent’s Village and Nugent’s Heights, since we have been in office, we have moved speedily to make sure the infrastructure is put in place.  We have engaged Surrey Paving to do our second stage of that road work.  I am happy that upon completion of the first phase we recognize that persons are beginning construction in that area,” Mr. Hector said.