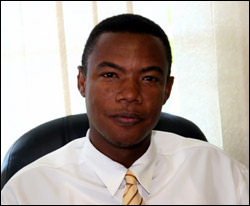 Junior Minister of Trade and Industry, Consumer Affairs and Import and Export Control in the Nevis Island Administration (NIA) Hon. Dwight Cozier, in an interview with NTV’s Channel 8, spoke of his recent trip to Montego Bay, Jamaica where he attended the Caribbean Forum of Local Government Ministers.

Minister Cozier noted that he represented the Federation at the conference after the Deputy Prime Minister Hon. Sam Condor was unable to attend.

The forum was a success according to the Minister who spoke of its benefits.

“The conference was indeed one that I believe was very beneficial for me on a personal level since I was able to learn a lot.  It was beneficial also to the country in respect of the initiative in local governance that we articulated earlier on, that is, in 2006, earlier on in the Nevis Reformation lead Nevis Island Administration,” he said.

The Minister expressed his delight in local governance in Jamaica and spoke of his hopes to see The Nevis Parish Council Ordinance take effect.

“While we have not yet adopted the parish council, we are thinking very seriously of it and while I was in Jamaica, I was also able to meet the Director General of the Commonwealth Committee that is directly in charge of the local council or the local government initiative.  He has given me his undertaking that he is willing to come to Nevis and he’s willing to give us all of the assistance necessary including funding to implement the local council initiative here,” Minister Cozier said.

He also used the opportunity to market the Federation and to speak of recent highlights particularly on Nevis.

“I met the Prime Minister of Jamaica Hon. Bruce Golding.  I had some talks with him about St. Kitts-Nevis and about Nevis in particular.  He wanted to know how we were getting along.  His government is certainly as new as the NRP lead Nevis Island Administration government and I was able to let him know of our new discovery of the geothermal resource,” Minister Cozier said.

The Minister assured Nevisians of the great opportunities ahead if the geothermal project were to become successful.

“The people of Nevis are looking at a very, very bright future and perhaps the person who coined the phrase “˜Government in the Sunshine’ knew what they were saying in this regard,” Mr. Cozier said.

The forum was also attended by representatives from Antigua and Barbuda, Barbados, the Bahamas, Belize, Dominica, Grenada, Guyana, Haiti, Jamaica, Montserrat, St. Lucia, Suriname, St. Vincent and the Grenadines and Trinidad and Tobago.

Meantime, Mr. Cozier also used that time to speak of his role as chairman of the recently launched Nevis Investment Promotion Agency (NIPA).

“The Nevis Investment Promotion Agency is something that has come in response to the development effort of Nevis that is being driven by the Nevis Island Administration,” Minister Cozier said.

He appealed to the Nevisian public to contact him directly with business problems they may be experiencing.