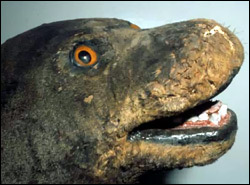 The  Caribbean Monk seal (or West Indian seal) has been announced extinct on Friday. This comes as a shock, as this is the first  seal species announced extinct due to human activities; now, it will only be seen in drawings.After five years of futile efforts in which not even a single sighting has been reported, the U.S. declared extinct, and also declared that no other seal species has been extinct because of us. This probably (and sadly) opens the way for more such species to become extinct – unless something changes.

The Caribbean Monk Seal was a  relatively small seal (6-9 feet) with rolls of fat around its neck and brown pelage that faded to a  yellow-white color on the stomach. The last recorded sighting occurred in 1952.

In the United States, the last recorded sighting of this marine mammal occurred in 1932 off the Texas coast. The very last reliable records of this species are of a small colony at Serranilla Bank, in 1952.[2]

Unconfirmed sightings of Caribbean Monk Seals by local fishermen and divers are relatively common in Haiti and Jamaica, but two recent scientific expeditions failed to find any sign of this animal. It is possible that the mammal still exists, but some biologists strongly believe that the sightings are of wandering Hooded Seals, which have been positively identified on archipelagos such as Puerto Rico and the Virgin Islands.

A collection of Caribbean Monk Seal bones can be found at the Tropical Crane Point Hammock Museum in Key Vaca.

During his 1493 voyage, Christopher Columbus described the Caribbean Monk Seal as a “sea-wolf.” The region was soon colonized, and whatever habitat this species had was lost. People also began exploiting it commercially for its oil, and less frequently, for its meat.