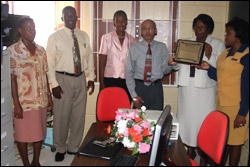 The Charlestown Secondary School (CSS) was on Friday June 06, 2008, the recipient of an English Language Resource Center funded by the First Caribbean International Bank.

The center formed part of an initiative the school had put in place to promote continued learning by developing available facilities.

In a handing over ceremony at the school, Principal Education Officer Mrs. Jennifer Hodge urged students to take advantage of the facility.

“To the students, this resource is an investment in you which I hope will motivate you to use and use well,” she said.

Mrs. Hodge expressed her appreciation to the donors on behalf of the Nevis Island Administration (NIA), the Ministry of Education and the CSS.

“We thank you for your symbolic contribution and investment to the children of the Charlestown Secondary School.

“We really appreciate your coming on-board with the students here at the Charlestown Secondary and I know that they are going to make full use of the investment that you have placed in them,” she said.

Principal of CSS Mr. Edson Elliott too expressed gratitude to the First Caribbean International Bank and challenged other businesses to take example from the bank and contribute to the school.

He also spoke of the school’s plan to develop the area, which previously housed the Sixth Form College, into a resource center.

Manager of the Nevis Branch of the First Caribbean International Bank Mr. David Duberry spoke of the bank’s drive to contribute to the community and encourage learning while Retail Branch Manager Ms. Jasmine Parris officially handed over the facility to the school.

“We wanted to make our contribution something that will be long-lasting and benefit the youth in particular,” Mr. Duberry said.

He gave a brief explanation of the contents of the center and explained why the initiative was taken.

Members of the school’s English Department as well as students were also present at the handing-over ceremony.