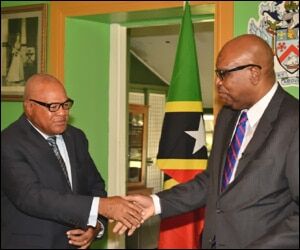 His Excellency Dennis Michael Morton, J.P., will carry out the functions of the Governor General of St. Kitts and Nevis as he serves in the absence of His Excellency Sir S.W. Tapley Seaton GCMG, CMO, QC, JP.

Mr. Morton took the Oath of Office and the Oath of Allegiance as the Governor-General’s Deputy on Tuesday (March 15) and began duties on Wednesday (March 16). He is expected to serve in this capacity during the short absence of Governor General Seaton.

“It is indeed an honor for me and indeed a great privilege being called upon to serve my country at this level,” Mr. Morton said, while thanking God for the wisdom, strength and courage to perform this role. Gratitude was also expressed to his family and friends for continued support.

“I assure you Excellency, that I will uphold the high standards set by you and all the predecessors of this office and to carry out my duties to the best of my ability,” Mr. Morton pledged.

Governor General Seaton expressed confidence in Mr. Morton’s ability to carry out the important functions of the Queen’s representative as the head of state in St. Kitts and Nevis, saying “I am leaving the office in safe hands.”