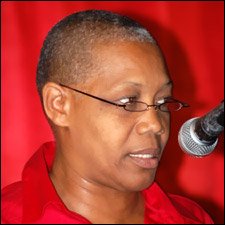 Former Speaker of the St. Kitts and Nevis National Assembly, Ms. Marcella Liburd has warned against giving political power to those who control the economy, scoffed at suggestions by the opposition People’s Action Movement (PAM) that during its Kennedy Simmonds-led administration from 1980 to 1995 the people of St. Kitts “had more money in their pockets” and highlighted the achievements of the ordinary citizen under the current Labour Government of Prime Minister Hon. Dr. Denzil L. Douglas.

“I believe some of them (ordinary people) will have to go look in their pants and shake them out and see if the money stick in it, because PAM trying to fool you. But don’t let them fool you, because it is only now since this Labour Government has been in office that ordinary people have house, over 2,500 of them. How they are going to get house without money? It is only since Labour is in office that ordinary people have land. How are they going to get the land without money,” said Liburd at a political meeting in Lime Kiln, West Basseterre last Sunday.

Ms. Liburd told thousands that it was only under the Denzil Douglas Labour Administration that students of all political affiliation can pursue university or college education.

“It’s only under this Labour Government that your children can go on to college and they need money to go on to college. Look at the hundreds of parents going off all over the world to attend the graduation or commencement exercises of their children and grandchildren,” said Ms. Liburd, adding: “Some of them have never been to the US in their life. They told me it’s the first time are going to the United States is when they left to go to their sons or daughters graduation. It takes money to go there.”

She reiterated that it was this Labour Government that has made it possible for the ordinary people in St. Kitts and Nevis to own shares in Cable &Wireless and in National Bank.

“You never had that before. Don’t let them fool you. The ordinary people of this country are better off under Labour. They have more money under Labour because they could invest it in house, in land, in their children’s education and in other various investments,” said Liburd, the Labour Party’s candidate to replace the retiring Hon. Dwyer Astaphan in Central Basseterre.

The former national netballer and educator also made reference to the number of vehicles owned by young and ordinary people in St. Kitts.

“What they buy them with? Stones? More money is in this country now between 1995 and this period than ever before. If you want any more evidence of this, check out their big business friends and look at the reports. They ain’t hiding and they forget to check their own reports,” she stated.

Ms. Liburd said the financial reports from the several business houses in St. Kitts indicate that it is only during the present Labour Party Administration that they have made the most money in their business life.

“It is their reports that say so. It is under this Labour Government they say they are making more money than they made under PAM than they ever made in their life. So how it is that under a PAM Government, they never made this kind of money. If PAM is saying there was more money in people’s pockets during their time in office, then where is the money? Where the money was? Business people now saying they are making more money now than they ever make in their life. So don’t let anybody fool you. More money now under Labour that PAM ever would dreamed of. They are far better now with Labour that they did under PAM,” Ms. Liburd said.

“Why are they trying to remove the Labour government? Ask yourself a question and see if it makes sense to their business that is making more money under this Labour Government than they were making under a PAM Government. But still they want to put back in PAM. They don’t want Labour to win. That does not make any sense,” said the lone female candidate in the upcoming election.

“So it ain’t about nothing to do with the economy. Because something had to be working for them to be able to make that kind of money, but what they want they want, is the economic power and they also want to have the political power at the same time. So you know what would happen to you, the ordinary people” said Ms. Liburd.