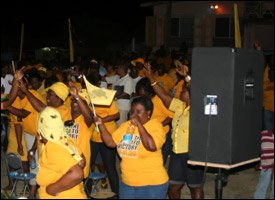 The People’s Action Movement’s Campaign for CHANGE  train rolled into Conaree Village on Wednesday 17th for a massive public meeting that accompanied the official opening of the party’s constituency office.

A bumper crowd of hundreds of excited and enthusiastic supporters cast the island main road in brilliant gold as they came out in their numbers donned from head to toe in their party’s colours. They lined both sides of the road and passing motorists were left in no doubt of the overwhelming groundswell for change that has developed in the country. The festive mood that arose from the elaborate costumes created from the traditional party t ““ shhirts, the contagious celebratory atmosphere and the musical entertainment of the local Higher Heights band formed the perfect backdrop for the massive meeting.

As usual for a PAM meeting the speakers were focused on the pressing issues that are negatively affecting the quality of life of the ordinary working man and woman.. The meeting opened with the dynamic new young Candidate for Constituency #7 Mr. Ronald Williams who, in his usual eloquent manner, laid the groundwork with his incisive critiques of the current lack of representation facing the residents of the community. He ended his presentation with trademark flourish as he “approved this message” and showed clearly why the tenure of the current Minister of Finance is also at an end.

The other speaker, also a new candidate wasted no time employing his expertise to educate the crowd about the most recent calamity to befall the local electricity supply. As an engineer by training, Mr. Bernard Welsh was well placed to refute the plane ridiculousness of the latest explanation proffered by the government as an excuse for the instances of mismanagement that just keep piling up. His presentation took on an extra sense of poignancy held so close to three of the giant Labour Party advertisements that somehow St. Kitts and Nevis is working; the crowd could not help but ask, what about the electricity?

The next speaker was introduced to eager applause being consistently voted the most popular Member of Parliament. The Hon. Shawn Richards, a veteran despite his tender age, roused the crowd with his loquacious and witty style pointed out how the cost of living show just how the economy is not working for the vast majority.

The candidate for the community Mr. Eugene Hamilton made an impassioned appeal to the voters to cast their ballot for the candidate with the proven record of achievement in both the public and private sectors while he laid out a history of success that is simply unmatched by his opponent. He brought a measured and serious tone to the meeting that underscored the critical nature of the upcoming poll and the weight of responsibility that each voter faced.

The curtain was brought down by the political leader Mr. Lindsay Grant, who asked a simple question; who is St. Kitts and Nevis working for. He produced a file of titles indicating the vast amount of wealth amassed by the Prime Minister over his tenure while for too many ordinary people wealth has actually been lost under Labour. It was clear that even if this country is working the benefits only reach the tiniest minority.

The food and drink flowed as a good time was had by all in attendance. The size and enthusiasm of the crowd was too much even for the Prime Minister who could not be satisfied with the reports he was evidently receiving but had to drive through to see for himself much to the delight of the crowd which greeted him with resounding jeers and heckles.