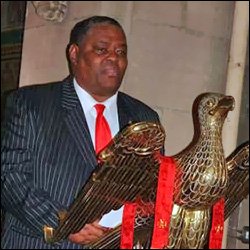 Funds from the 25th Anniversary Independence Ball in London will be handed over on Monday 12th January to Minister of Health, Hon. Rupert Herbert.

The 10,000 pound sterling will be presented by St. Kitts and Nevis’ High Commissioner to London, His Excellency Dr. James Williams during a brief handing over ceremony at the Ministry of Health at Bladens.

Ambassador Williams told the Communications Unit in the Office of the Prime Minister (CUOPM) that the money is to go towards the Dialysis Unit at the Joseph N. France General Hospital.

He said the money was raised from the 25th Anniversary Independence Ball held under the distinguished patronage of the Prime Minister and Minister of Foreign Affairs, the Hon. Dr. Denzil L. Douglas.

Prime Minister Douglas was the Guest Speaker at the Ball, jointly organised by the High Commission in London and several national associations of St. Kitts and Nevis in England and Wales.