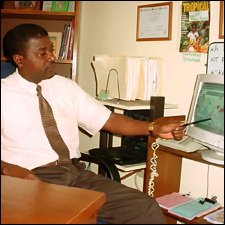 He also reports no cases of measles and mumps, polio or hepatitis during his period and a drop in the number of HIV cases and deaths.

The Chief Medical Officer also reported that the three leading causes of death in 2006 to 2008 were heart disease, stroke-related syndromes and complications of diabetes.

“Compared to 2001-2005, estimated population increased by 3.9 percent and the average number of live births decreased by 6.7 percent from 736 to 687 with the new increase in population due to inward migration,” said Dr. Martin in the report.

“Absolute infant mortality remained unchanged (average 12 per year) – the relatively wide fluctuations in the infant mortality rate reflect larger annual changes in the numerator (infant deaths) compared to the denominator (live births).  Neonatal (<28 days) deaths, especially in the first week of life, continue to account for the vast majority (80%) of infant deaths.  Deaths in this age group are largely due to conditions originating in the perinatal period, chief among them respiratory distress syndrome associated with the immature lungs of premature infants.  There were 2 maternal deaths in period as was the case in 2001-2005,” said the report.

Of circulatory disorders, deaths due to heart diseases increased while that for stroke syndromes remained unchanged. Increases were also seen in neoplasms (30%) and external injuries (33%).  The leading disease causes of death in 2006-2008 were heart disease, stroke-related syndromes, complications of diabetes and homicide.

According to Dr. Martin, Chronic Non-Communicable Diseases have dominated the epidemiologic profile since the early 1980’s.

He said a recent survey of risk factors (STEPS, WHO, 2008) found adult overweight prevalence of 75% and hypertension prevalence of 36%.

The diabetic prevalence is estimated to be 15-20% extrapolating from the public sector diabetic clinic register.

He said violence-related external injury continues to increase.  In 2001-2005, the number of assault (non-gunshot) and wounding cases presenting to the main hospital’s emergency room tripled compared to the previous five-year period.  There were 56 homicides in 2006-2008 compared to 42 in 2001-2005; most were attributed to drug-trafficking gang activity.

The increase in homicide is reflected in the increase in deaths of persons 20-59 years. Approximately 1.2 percent of the total population is registered in the public sector’s mental health program.  The major mental illnesses are schizophrenia, depression and substance abuse disorders.

Communicable Diseases account for less than 5 percent of deaths. The only endemic disease is Dengue Fever with outbreaks approximately every 6-7 years, the last being December 2008 with 60 confirmed cases.

Tuberculosis increased from 1 case of in 2005 to average annual incidence of 3 cases in 2006-2008.  There were no cases of the diseases covered by EPI – Hemophilus B, Hepatitis B, Polio, Measles, Mumps, Rubella, Diphtheria, Pertussis, and Tetanus. Malaria and cholera are non-existent.