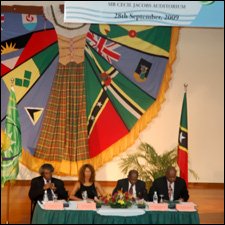 St. Kitts and Nevis’ Prime Minister Hon. Dr. Denzil L. Douglas said Monday night the time is now in the history of the Eastern Caribbean for establishment of a truly meaningful economic union capable of ameliorating many of the risks faced by the sub-regional countries, and of bringing real and tangible benefits to the people of the Eastern Caribbean.

Addressing the official launching of national consultations on the proposed OECS Economic Union at the Eastern Caribbean Central Bank, Prime Minister Douglas said the global economic climate dictates a rapid move to the next level of integration.

“The challenges that many of our countries have faced over the past months as a result of the global financial crisis have forced us to put our heads together to arrive at joint solutions to the problems that we face. We have had to develop a stabilization plan that seeks to coordinate and harmonize a wide range of monetary, fiscal, regulatory, sectoral and social policies. Many of these policies were considered to be outside the realms of regional decision-making, but in the context mammoth challenges of global origins, we found it advantageous to cooperate even more broadly and meaningfully for the benefit of the people of the region,” said Dr. Douglas.

He said he is convinced that the great collaboration and cooperation demonstrated by the OECS policy-makers during this period of global economic malaise must be continued and enhanced in an appropriate institutional setting.

Dr. Douglas expressed confidence that the global crisis will pass but the dynamic nature of global economic relations and the impact of globalization are such that new challenges will emerge with even greater frequency in the years ahead.

“Hence, we must quickly put in place the Economic Union to provide the institutional setting that would foster united or coordinated responses to the challenges that will confront us from time to time. Secondly, if the countries of OECS are to achieve levels of growth consistent with continuous improvement in the quality of life of the people of the Eastern Caribbean, we cannot only react to global phenomena; we must also be proactive, and actively search out opportunities in the global economy,” Dr. Douglas, who is also the Chairman of the OECS Authority said.

Quoting Augustin Carstens, Deputy Managing Director of the IMF who said at an International Conference in Trinidad and Tobago that “˜seizing the opportunities presented by globalization means by definition increasing integration with the world economy,’, Prime Minister Douglas responded: “Unfortunately, increasing integration with the global economy is a very treacherous and risky endeavour for a small island state, especially a Nation with a population of population of 45,000.”

“It is therefore critical that the small island states of the OECS combine our resources with a view to realizing the benefits of economies of scale and enhancing our bargaining power so that we may compete more effectively in the global market place. Similarly, a more tightly integrated OECS would be better equipped to take advantage of opportunities in the CARICOM Single Market and Economy (CSME),” said Prime Minister Douglas.

Dr. Douglas also said that the OECS Economic Union is timely because it seeks to build on a set of institutions that were facilitated and provided for by the Treaty of Basseterre in 1981, and that have grown strength to strength over the years and the Economic Union is the natural next step in the historical evolution of OECS economic integration.

Dr. Douglas also said that the dramatic global geopolitical shifts over recent decades have diminished the strategic importance of the Caribbean region, and “we run the risk of marginalization in global political and economic decisions.”

“Indeed, it is becoming increasingly clear that shared sovereignty through effective collaboration and coordination in a strong union may be an important avenue through which we may protect our national sovereignty and ensure that our voice is heard in international forums,” said Dr. Douglas.

He said that he is convinced that the OECS Economic Union is timely because the people of the region has seen the benefits of collaboration through the existing OECS institutions are now ready for the next step.

“I cannot help but detect a sense of frustration among our people over the relatively slow pace of regional integration. This is vastly differently from the situation that existed when the Federation collapsed because integration is not being pushed upon us by outside forces. Instead, it is being recognized by our people as a potential force for significant social and economic transformation,” said Prime Minister Douglas.

He told the audience of government officials, private sector representatives and high school students that he was confident, that the Consultations process will be fruitful and constructive and it will give national the opportunity to play their part in shaping the future Caribbean society.

“I am proud to share in this momentous event that I believe will help to unite our people as we push on the wheels of social and economic progress. The creation of a single economic space in the region will give our people more room to express and manifest their immense talents and capabilities and will prepare them to venture confidently into global waters in search of opportunities,” said Prime Minister Douglas.