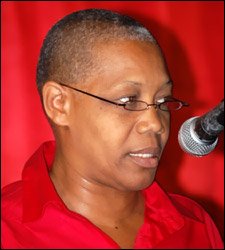 A call has been made for the General Manager of the St. Kitts and Nevis branches of British American and a former Director, Mr. Eugene Hamilton, to disclose what he knows, when did he know, whether he had investments in the company and if he withdrew his benefits prior to the collapse of the financial institution.

Speaking at a meeting in Upper Money Hill on Sunday, former Speaker of the St. Kitts and Nevis National Assembly, Ms. Marcella Liburd said thousands of local investors in St. Kitts, in Nevis and overseas want to know what happened to the investments that  Mr. Hamilton made in British American.

She noted that on the platform of the opposition People’s Action Movement (PAM), Mr. Hamilton, the Deputy Political Leader, constantly uses the phrase “accountability and transparency.”

“First you could not find him. Then he went quiet and since he has resurfaced up to now, Mr. Eugene Hamilton, the General Manager and former Director of British American Insurance, has not come to the public to say anything to the clients about British American money. Then they are out there talking about accountability, transparency and all kinds of cy’s, but you cannot see or hear from Eugene Hamilton about the money thousands of persons invested in British American,” she said.

“This is a critical time and nobody with that kind of record should be offering himself to be elected to public office. It could not happen anywhere else in the world and so we must send a resounding message to Eugene Hamilton and to the People’s Action Movement that persons who cannot account, who cannot say to the people who are hurting for the apparent loss of their investments, that they are not suitable to hold public office.”