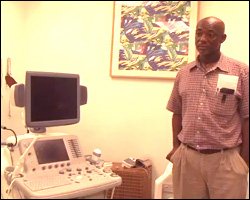 Nevisians have been assured of the provision and maintenance of high quality diagnostic services at the Alexandra Hospital. The Ministry of Health gave that assurance recently following a report on a radio call in programme last week that the hospital’s ultrasound machine was not functioning.

The Ministry confirmed that the machine was functioning and described the reports as baseless and reckless.

During a subsequent visit to the Hospital by the Department of Information, Senior Radiographer Mr. Glen Herbert explained there was a minor software problem which was being addressed but that the machine was in fact functional.

“What I would say to you is that the machine is functioning. The only problem here is that when we turn on the machine, a number of errors would come up and this happened when the guys from the company came to install the machine initially.

“In so doing they urged us not to use the machine that way but they would come soon to rectify the problem because all the errors indicated that one or two of the boards were having a little problem but you can use the machine just as is,” he explained.

Permanent Secretary in the Ministry of Health Mrs. Joslyn Liburd confirmed that the suppliers of the machine, Express Medical Supplies had been contacted about the problem and a technician was expected on the island to tend to the matter shortly.

Meantime, Mrs Liburd reiterated the Ministry’s promise to avail the public of continued high quality services and explained that she was satisfied with the equipment and services at the island’s main health facility.

“We are trying to make sure we have adequate but affordable service and for now I am pleased with what is available,” she said.

However, Mrs. Liburd said plans were afoot for the next major project which entailed the purchase of a mammogram machine.

“The mammogram machine would satisfy the public need because of the increased awareness of breast cancer and the benefits of early screening,” she said. At present that service is available to Nevisians in St. Kitts.