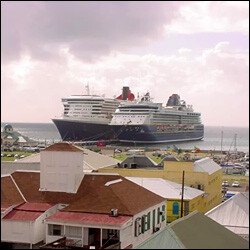 St. Kitts and Nevis Prime Minister Hon. Dr. Denzil L. Douglas said Monday that the actions of the People’s Action Movement (PAM) in government between 1980 and 1995 “were not just an attack on the Labour Party but also a massive assault on the entire Labour movement and on the right of the workers to associate and strengthen their bargaining power.

“It is clear that the changes initiated by PAM in 1980 were bad for the people of this country,” Prime Minister Douglas told thousands at the end of the traditional Labour Day March through the streets of Basseterre.

Dr. Douglas, the National Political Leader of the governing St. Kitts-Nevis Labour Party noted that the opposition is again advocating change in the run up to the next general elections, constitutionally due by October this year.

“But you must let them know that the only change you are interested in, is the continuing change that Labour offers ““ change that guarantees our people, of every walk of life, respect and dignity; change that promotes human development; change that creates opportunities for our people to generate income and create wealth; and change that empowers vulnerable groups including young people, the poor and the aged; change that is managed and implemented by a team of experienced and caring leaders; real change; good change, progressive change, continuing change, Labour change,” declared Prime Minister Douglas.

He said that when his Labour Party assumed office in 1995, it proceeded to build on those changes that the Labour Movement itself had initiated and implemented over the course of the 20th Century.

“We decided to directly intervene in the labour market to correct many of the inequities that had developed as a result of the massive assault on trade unions and on the Labour Movement over the preceding 15 years.  We held fast to our overarching mandate to protect the poor and vulnerable in our society.  Hence, in just under 14 years, we have raised the minimum wage by over 150 percent to its current level of $320 per week, and we have increased the minimum pension paid by social security by 100 percent,” said Dr. Douglas.

Earlier this year, Social Security Pensioners received increases of up to 15 percent on their monthly pensions, in keeping with a commitment to review social security pensions every three years and to protect the pensioners from the impact of cost of living increases.

“We are also determined that our workers and other low-income groups must not continue to pay most of their weekly wage in rent. Hence, we have given an unprecedented number of our low-income families the opportunity to procure their own homes. Since we assumed office in 1995, we have built over 2500 homes for the benefit of low income families. We are building some 1,000 houses for our citizens. The National Housing Corporation (NHC) is making good progress in the implementation of a Venezuelan funded project that will upgrade some 200 starter homes and provide 300 homes to former sugar workers. Moreover, the NHC is currently building another 500 homes that are being provided to new homeowners, including young people in particular. This impressive performance in the housing sector compares with less than 200 houses constructed by PAM in the 15 years they were in office,” said Prime Minister Douglas.

He said Government continues to investing heavily in infrastructure and growth-enhancing projects to ensure that the people enjoy progressive and continuous increases in their standard of living and they are able to comfortably earn the income necessary to pay for the homes that they have been provided, and will continue to be provided, under Labour.

Dr. Douglas singled out the expansion of the apron and parking facilities at the Robert Llewellyn Bradshaw International Airport to accommodate more jets with scheduled flights from New York, Philadelphia, Atlanta, North Carolina and London and daily international flights from Miami.

“It is not surprising therefore that notwithstanding the closure of the Four Seasons Hotel as a result of hurricane damage, passenger movement through the Robert L Bradshaw International Airport increased by some 19 percent in 2008 alone. This is what Labour means by change ““ real change; good change, progressive change, continuing change,” said Prime Minister Douglas.

Referring to the Southeast Peninsula was merely a home for cattle and goats, with little or no immediate prospects for development, when the St. Kitts-Nevis Labour Party took office in 1995, Dr. Douglas pointed out that his Administration has attracted vast amounts of direct foreign investment to the area.

“Currently, Kiawah Development Partners are constructing a world-class Tom Fazio Golf Course that is expected to become the centrepiece of the Christophe Harbour Development that will include a classy Mandarin Hotel, a high-end Marina capable of accommodating some of largest and most luxurious yachts on the seas, and hundreds of luxury villas that will enhance our room capacity and provide a wide range of employment and entrepreneurial opportunities for our people,” said Dr. Douglas.

He scoffed at rumours being spread by the PAM about the access that locals would enjoy at the Southeast Peninsula.

“I would like to make it clear that our beaches are public beaches under the Law and this is specifically spelt out in the Christophe Harbour Development Agreement that we have signed. Moreover, any property constructed at Christophe Harbour must comply with a set of development standards which are considerably higher than the standards applicable in the rest of St. Kitts and Nevis. In addition, the Development Planning and Control Board is empowered to ensure that any property constructed at the Peninsula comply with those standards,” said the Prime Minister.

He said that the Christophe Harbour project is a major undertaking that is moving forward and in spite of the global recession that has created a slew of dead hotel projects throughout the region, a number of other major projects in St. Kitts and Nevis continue to make steady progress.

“These include Silver Reef, Ocean’s Edge, Sunrise Villas, and the Marriott Condominium project. This is a tremendous show of confidence in the Government and people of St. Kitts and Nevis and in the policies of your progressive Labour Government,” said Dr. Douglas.

He said that on taking office in July 1995, Port Zante had little prospect of economic activity because of its poor design and vulnerability to hurricanes.

“My Government have borrowed money to correct the design defect and reinforce the entire facility through an extensive and expensive revetment project. Today, it is clear that our money was well spent because Port Zante has attracted vast amounts of foreign direct investment and has become a thriving cruise ship port with shopping and entertaining facilities that rival similar facilities in many of the top cruise ship destinations in the Caribbean. Indeed Port Zante has been at the centre of our strategy to boost cruise tourism arrivals, which at present growth rates could approach a million passengers within five years,” said Prime Minister Douglas.

“Since 1995, the number of tourists coming to our shores by air and sea has jumped dramatically from well under 150,000 to a projected 500,000 for 2009 and the number of hotel and condominium rooms has more than doubled. The impact of the resulting increased tourism expenditure is seen and felt throughout the entire economy,” said Dr. Douglas.

“Our taxi drivers have felt it; our tour operators have felt it; our expanding array of restaurants and bars (for instance on the strip) have felt it; our craftsmen and craftswomen have felt it; our talented musicians and performing artists have felt it; and our large number of small entrepreneurs providing goods and services that cater to the specific and varied needs of our visitors can now hold their own in our society as a result of their earnings from the tourism sector. Indeed the entire country has reaped massive benefits from the dramatic increase in visitor arrivals that has resulted from the creative economic policies of my Government and our relentless marketing campaign that is generating a discernable buzz in the international tourism marketplace.