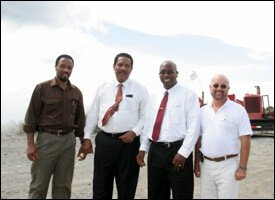 Dominica’s Minister of Energy Hon. Charles Savarin said Thursday that his island’s government was in support of the geothermal project on Nevis.

Mr. Savarin who was accompanied by his Chief Technical Officer in the Ministry of Public Utilities, Energy and Ports Mr. Lucien Blackmoore, was at the time on a one day fact finding mission on Nevis with geothermal developers West Indies Power Nevis Ltd.

During a visit to the borehole Nevis 3 at Hamilton Estate, Mr. Savarin told the Department of Information, that his island had also embarked on geothermal explorations and it was vital that he observed the operations on Nevis.

He said it was important for the region to share information one with the other, as to how they proceeded to deal with the important question of energy in particular renewable energy.

Mr. Savarin further explained that in the case of Dominica the dominant electricity provider was privately owned DOMLEC but in the case of Nevis it was government. So there were certain differences but there were also commonalities and what was done in Nevis was of interest to Dominica and vice versa.

The Dominica Government Minister described the visit to the geothermal site in Hamilton as extremely exciting.

“We have seen a test well with actual production producing steam and hot water, therefore demonstrates  effectively beyond just the pure science that in fact there is a reservoir, that there is the potential to generate electricity  and that they are already here to move to the next  stage beyond the test well into production.

Meantime, the Dominica Energy Minister said too, that the Power Purchase Agreement which was recently signed between the Nevis Electricity Company Ltd. and geothermal developers West Indies Power Nevis Ltd. was also of interest to his government.

“Since the dominant power company in Dominica is not government owned unlike Nevis it is privately owned, it would mean that the negations would take place between West Indies Power and DOMLEC. The independent Regulatory Commission would have a role to play to ensure that the public interest is protected at all times,” he said.