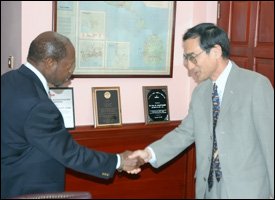 The Federation of St. Kitts and Nevis and the Kingdom of Japan have agreed to look at new areas to improve bi-lateral relations.

Prime Minister Douglas thanked the Government of Japan for its assistance over the years to the economic and social development of St. Kitts and Nevis.

Ambassador Iwata said he was impressed by the high level of education and the 98 percent literacy rate in St. Kitts and Nevis and he was honoured to be Japan’s representative to a very civilised country.

He said Japan is willing to provide assistance to St. Kitts and Nevis in new areas of cooperation as identified by the Government in Basseterre and thanked Prime Minister Douglas for his administration’s support at the United Nations for a seat on the Security Council and the International Whaling Commission.

1 thought on “Japan and St. Kitts – Nevis To Cooperate In New Areas”