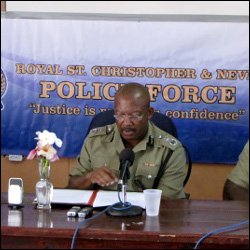 The following is the text of Commissioner Austin Williams’ presentation.

The Federation has experienced a 10% increase in reported crime in 2008 over 2007, despite our prevention strategies which included community outreach programmes, increased stop and search operations, increased patrols, and enhanced intelligence gathering.  In 2008 there were 2048 reported crimes compared to 1852 in 2007, an increase of 196.

While there was an overall increase in reported crimes, the police enjoyed successes in several categories of crimes.  In 2008 there was a 14% decrease in robberies and a 2% decrease in house breakings and larcenies.

Our stop and search operations and drug interdiction exercises have resulted in an 87% increase in drug prosecutions.  This success has however, contributed considerably to the overall increase in our crime rate as there were 172 drug prosecutions in 2008 compared to 92 in 2007, an increase of 80.

Fear of crime is a very prevalent issue today. Many people in today’s society express anxiety and fear about crime, and about being victimized. During 2008 there was an increase in the number of murders in the Federation over 2007.  This led to widespread public fear of crime and concerns for personal safety by residents.  The overall crime position however, is that crimes against the person accounted for just over 10% (10.8%) of total crimes, while crimes against property accounted for 76%. Murders accounted for 1.1% of all crimes reported.

Offences against property continue to be the largest category of reported crime in the Federation, with 227 reported.  This number however, has reduced compared to the same period last year, when 310 reports were made, a reduction of 83 or 27%.

Increases in firearm and drug related offences are a direct result of Police strategy to combat this category of crime.  Our efforts have resulted in increased seizures and prosecution.  We expect this trend to continue, based on our new strategy of intelligence led policing through the formation of the anti-gang unit, with its intelligence arm.  We will continue to collaborate with the Defence Force and other law enforcement agencies, to combat and reduce crime.

NB. March statistics have not been completed, but we do not expect any drastic change to the position reported above.

In 2009 we will continue our efforts towards creating a safer St Kitts-Nevis through Policing Excellence via the eight strategic goals. Considerable progress has been made to date in our strategic objectives of challenging crime and criminal behavior at all levels, maintaining public order, safe guarding the security of the state from subversive and terrorist elements and generating public confidence and safety on the streets.  I have no doubt that this year will be one of unprecedented change and hard work but I am confident that the men and women of the Police Force will rise to the challenge to achieve our vision of making St Kitts-Nevis the safest place to live and do business.