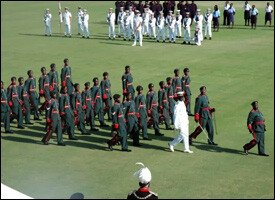 High ranking officials from the United States, France, the United Kingdom, Russia and the European Union will be among local officials and dignitaries attending functions on Saturday to mark the 26th Anniversary of the Independence of St. Kitts and Nevis.

First Secretary of the European Commission in Barbados and the Eastern Caribbean, Mrs. Karina Dzialowska Vacher and Leader of the Opposition PLP faction in St. Eustatius, Hon. Clyde van Putten will also be present.

The officials will attend the Military Parade at the Warner Park Stadium Saturday morning, followed by the Toast at Camp Springfield and the Governor General’s Reception at Government House on Saturday night.

The Federation’s Governor General His Excellency Dr. Sir Cuthbert Sebastian will take the Salute at the Military Parade which starts at the Warner Park Cricket Stadium at 8:00 A.M. on Saturday.

Prime Minister Dr. the Hon. Denzil L. Douglas is expected to inspect the armed and unarmed units on Parade comprising members of the St. Kitts-Nevis Defence Force, the Coast Guard, the Royal St. Christopher and Nevis Police Force, the Cadet Corps, the St. Kitts and Nevis Fire and Rescue Services, the Girl’s Guides, the Boys Brigade, the Red Cross, the St. Christopher Air and Sea Ports Authority, the School’s Crossing Guards, the Seventh Day Adventist Pathfinders and the Majorettes. A platoon from the visiting ship HMS Iron Duke is also expected to be on parade.

Governor General Sebastian and Prime Minister Douglas will view the Parade of the Armed Units during the Slow March and Quick March.

Several Government officials including the Speaker of the National Assembly, His Lordship the Resident Judge, Resident Ambassadors, the local Diplomatic Corps and members of the general public.