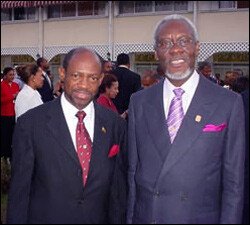 It is Most Unfortunate that the Most Honorable P.J. Patterson, former Prime minster of Jamaica, having accepted Doctor Denzil Douglas’ invitation to attend his New Year’s Eve Gala in St. Kitts, chose to publicly endorse Dr. Douglas as “the most respected leader in the Caribbean”.

Mr. Patterson did not think this when Dr. Douglas was flaunting his maliciousness and his vindictiveness in the face of  Mr. Patterson and his colleague Prime Ministers between 1995 to 1997. Many persons cringed in embarrassment for Mr. Patterson as he uttered those words.

The fact of the matter is that Dr. Denzil Douglas put a stain, an indelible blot, on his legacy of Prime Minister at the outset of his term of office, by his spiteful victimization of his predecessor, Dr. Kennedy Alphonse Simmonds, who led St. Kitts and Nevis into independence as a sovereign democratic nation.

Dr. Denzil Douglas refused to pay Dr. Kennedy Simmonds the Prime Minister’s pension to which Dr. Simmonds was entitled by law, even after Dr. Simmonds became so destitute as a result that he was forced to put up his house, where he lived with his wife and children, for sale on the open market.

This victimization by Dr. Denzil Douglas of Dr. Kennedy Simmonds was not a spur of the moment, passing phase. Dr. Douglas kept at it for more than 2 years. To be exact, Dr. Douglas heaped his spite on Dr. Simmonds for 811 days, defying in the process all of the other Caribbean Heads of Government who begged him in vain to behave himself and to act in a civilized manner.

Mr. P.J. Patterson was one of those Caribbean leaders whom Dr. Douglas defied. Mr. Patterson put his signature to a letter in which he told Dr. Simmonds that he sought to intercede with Denzil Douglas. At that time, Mr. Patterson was holding the office of Chairman of CARICOM. Several letters were written to Mr. Patterson complaining of Dr. Douglas’ refusal to pay the pensions of not only Dr. Simmonds, but also of Mr. Sidney Morris, and of Ms. Constance Mitcham, all former Minsters of Government who were lawfully entitled to receipt of a pension from Government. It appears that Dr. Douglas was telling Mr. Patterson and Mr. Patterson’s colleagues that he could not pay Dr. Simmonds’ pension because he had set up a Committee to look into an amendment to the Prime Minister’s Pension Act which had been passed by Parliament while Dr. Simmonds was in Government.

But Dr. Simmonds pointed out to Mr. Patterson that Dr. Douglas’ refusal to pay the outgoing Government Ministers did not stop Dr. Douglas from paying the Labour Party pensioners Mr. Lee Moore, Mr. Joseph N. France and Mr. St. John Payne under the provisions of the very same amendment.

Dr. Simmonds had to suffer the indignity of having to rely on the goodwill of friends and family to survive during those dark days. His bank mortgage payments went into severe default. His bank manager sent for him repeatedly to tell him the Bank wanted him to pay something on his bank loan for his house.

And after that, Mr. P.J. Patterson can call Dr. Douglas the most respected Prime Minister in the Caribbean? That was how Dr. Douglas started out. And he has ended on an even worse note. Dr. Douglas, at this time, is presiding over our country without a Budget. His Attorney General and the rest of his Government have been adjudged by the Eastern Caribbean Supreme Court to be in contempt of Court. As recently as July 2009, Dr. Douglas made a mockery of the Electoral Process by rushing through Parliament an amendment to the National Assembly Elections Act which gave a Returning Officer the right on Nomination Day to decide if he would approve proof presented by a candidate for elections that he did not possess dual citizenship.

This infamous Act has become known as The Lindsay and Shawn Act since it was expressly enacted to stop the Leader and Deputy Leader of the People’s Action Movement, Mr. Lindsay F.P. Grant and Mr. Shawn K. Richards, from taking part in the upcoming General Elections. This was another vicious example of the vindictiveness of Dr. Douglas. It was also an example of Dr. Douglas’ willingness to trample on the Constitution of St. Kitts and Nevis. The Amendment was challenged in Court. When the Court fixed a date for the case to be tried, Dr. Douglas’ lawyers asked for an adjournment, telling the Judge that they wanted to quote “have a word with their client” and get him to go back to Parliament and change the offending amendment.

It also a matter of record that in 3 days’ time the Act was substantially amended, leading to an Order for the Government to pay the legal costs of the case brought against the Attorney General. The country has to pay those costs, not Dr. Douglas personally.

Is it possible that Mr. P.J. Patterson is not aware that this is what Dr. Douglas is like? Does Mr. Patterson know that for the first time in the history of the Commonwealth Caribbean, a Government was forced to dissolve a Parliament which in less than 3 hours’ time would have been automatically dissolved by the constitutional termination of the people’s mandate?

Can even an outstanding lawyer like Mr. P.J. Patterson, or any other apologist for Dr. Denzil Douglas, say anything to justify Dr. Douglas dissolving Parliament and then clinging to the reins of Government for the next 23 days without announcing a date for general elections? Dr. Denzil Douglas sits at the Head of a Government which for those 23 days was illegal. Without Parliament being in existence, and without attempting to give the people of this country the chance to exercise their franchise to choose a new Government, Dr. Douglas was acting in flagrant violation of our Constitution. The democratic ideal does not countenance a Government in office whose term has run out not calling general elections.

Did Mr. Patterson forget all of these things? Because those of us who have to live here, live with the painful reality of the discredit Dr. Denzil Douglas has brought to the office of Prime Minister of St. Kitts and Nevis.