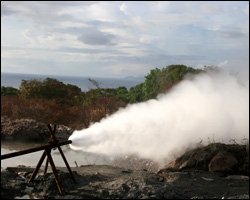 A top Nevis Island Administration (NIA) Official said that Nevis would have greater leverage to attract light industries to the island, once it began to utilise green, cheap electricity.

Junior Minister with responsibility for Communications, Works, Public Utilities, Post, Physical Planning, Natural Resources and Environment Hon. Carlisle Powell made the comment in an interview with the Department of Information on Thursday and cited the island’s ability to attract more industries, would be one of several major benefits geothermal energy would bring to Nevisians.

“We would be able to attract light industries which for the most part at the present moment are located in Trinidad because of the cost of using natural gas and the cost of cheap oil in Trinidad and Tobago”.

“So we will be able to dangle that carrot, to light industries who want to locate in Nevis and that to us at this present moment is something which is always going to be important for the people of Nevis. Once you are able to attract more industries, more businesses because of the cheaper green energy”¦people are going to want to locate in Nevis to take advantage of that fact,”he said.

Mr. Powell also pointed to the benefits of cheaper electricity to every household. He explained that in the meantime electricity usage continue to increase even with the distribution of 45,000 energy saving light bulbs under the Cuban Light Bulb Exchange Programme.

He also pointed the economic downturn in the world market which had affected the island’s tourism industry.

In the area of tourism Mr. Powell noted that Nevis had always been happy to boast of its extremely high repeat visitor rate. He also spoke of the island’s historical ties with the English visitors through Admiral Nelson and the Americans through Alexander Hamilton who was born on Nevis but later became one of America’s greatest early financial analysts.

“There is no better selling point than somebody who has come to Nevis saying to people when they go back home “I have been to Nevis and it is some place I will return to because it is fantastic for a holiday” .So we are always going to be in tourism and with geothermal and tourism going together it is an extremely good selling point,” he said.

Notwithstanding, Mr. Powell was hopeful that the geothermal project would continue to move forward that it would be as success as the exploratory phase which would allow Nevis to take advantage of the clean, green, renewable source of energy in a short time.