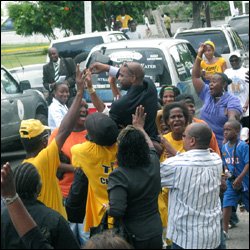 Despite highlighting the inefficiencies and corrupt practices of the Denzil Dougla-led administration, there continues to be trampling of workers and residents rights in St. Kitts/Nevis. This is according to leader of the People’s Action Movement (PAM), Lindsay Grant.

Grant pointed out that the practice of the Labour government has depreciated workers economic capacity and relegated them deeper into poverty and despair thus creating added challenges.

Grant pointed out that a number of workers are faced with the harsh reality of being denied sustainable employment with security of tenure and retirement benefits and are being forced into vulnerable and exploitive contractual and other employment situations.

The PAM leader noted that workers who are perceived to be supporters of PAM are being criminalised, victimised and politically, discriminately and vindictively denied their right to fair employment. He disclosed that he and his part has a list of individuals who have and continue to suffer under this undemocratic process being executed by the Labour Party.

He also noted that a number of businesses who are open supporters of his party are also discriminated and victimised against as they are being blatantly frustrated from functioning effectively. He disclosed that his party has evidence that public funds and public agencies are being misused and abused politically to vilify and manufacture propaganda. He added that all of these actions are attempts to delay action and distract attention from genuine concerns.

He declared his party will remain strong and vigilant and victory will be achieved very soon with the holding of federal elections. According to Grant, there is need for credible and unimpeachable institutions, a process that starts with the judiciary, national radio and television station, police force, defence force and a modern and professional civil service free from political tampering.

There is need for review of the constitution and the creation of laws that deal specifically with the enforcement and upholding of fundamental human and civil rights and not “paper or water” rights as now exists, he noted.